Sniffapalooza has been putting on a biannual event in New York City for perfume lovers since 2004. This past October the aptly named Fall Ball 2016 was the twenty-fifth of these to take place. In the past editions, it has been the opportunity for attendees to be exposed to all the shopping delights NYC has to offer. For this landmark edition, the organizers Karen Dubin and Karen Adams decided to give those who would be spending the weekend the opportunity to see something special. 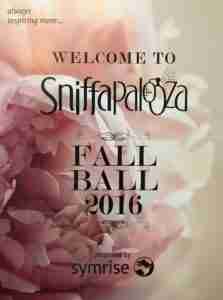 It was a chance for a consumer to peek behind the curtain to see how perfume is made, which is where Saturday of Fall Ball began. Symrise invited the group up to their Park Avenue offices where the perfumes they work on are composed. Over the course of two panels we were going to go “From Idea to Shelf”.

The first panel was comprised of Symrise employees as they would talk about how Symrise worked as a company in creating fine perfume. The second panel would bring in two of their clients who would interact with some of the same panelists as they gave us the background on their brands. 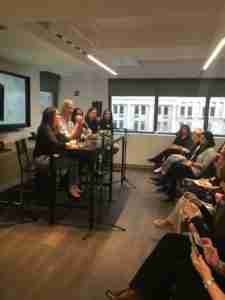 The panel was a fascinating look into how it takes an entire team to both land an account and eventually turn it into a fragrance to be sold. It starts at the beginning as all the panelists spoke about how when Ms. Pruett is vying for an account they will all learn as much as they can about that potential client. I learned that the cooperation that takes place in bringing a perfume to life occurs before the first raw material is chosen. Once the account is brought in each of the members of the panel do their jobs. Mr. Apel designs the fragrance, Ms. Bensamou and Ms. Catherine act as liaison between Mr. Apel and the client. That job of evaluator is often that of being the behind-the-scenes influencer. Hearing from both about their jobs is something rarely spoken of in the process of perfume making but it is a critical piece of the process. After the perfume is designed Ms. Bucher works on the marketing of it helping decide on the bottle.

For over 90 minutes this panel kept the entire room leaning in to absorb every word.

After the panel, we took a break to do some shopping at Bergdorf-Goodman on our way to the second panel at Brasserie 8 1/2.

Once again Ms. Bucher was moderating and was joined by Mr. Apel and Ms. Bensamou from the morning panel. The new additions were Eric Korman and Anne Serrano McClain of the brand Phlur along with Joseph Quartana of the new line Les Potions Fatales.

Throughout this panel we gained insight in to that give-and-take that happens during the creation of perfume which lives up to what the client wants. In the case of Les Potions Fatales Mr. Apel had been imaging an idea around the plant foxglove and the fairies who live in those flowers. As Mr. Quartana explained his concept Mr. Apel presented his idea to him. This would result in Digitalis becoming part of the initial collection.

I must thank the team at Symrise for being so willing to spend a Saturday with the group. For the rest of the weekend what we heard in these panels became starting points of discussions which took place as we spent our day walking around sniffing the new perfumes.

This made the twenty-fifth Sniffapalooza one of the most unique events I’ve been to.