Ever since we lost live sports it has been illuminating how important they are to my well-being. I realize even when the teams I root for lose I get a lot of joy out of watching. As much as anything I’ve felt that loss. I couldn’t quite bring myself to watch S. Korean baseball. I did watch an excellent documentary series called “The Last Dance” which helped fill in that sports shaped hole. 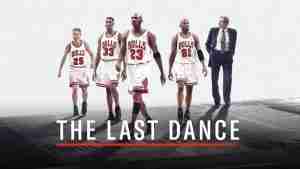 The advent of the streaming services has given form to the long-form documentary. I have enjoyed many of these because of the ability to go into greater depth on the subject. “The Last Dance” is all about the 1997-1998 Chicago Bulls NBA season. It is built around the film of an all-access production team which followed the team from pre-season to the championship victory parade. That the footage existed was an audacious bet by current commissioner Adam Silver who in 1997 was the head of NBA Entertainment. That is the equivalent of NFL Films where they make short videos of the sport. This was something entirely different. This was going to be hundreds of hours of footage. There were no streaming platforms back then. This story couldn’t be told in an hour. And there was one other thing. Mr. Silver got permission to film all this because he agreed never to release it without Michael Jordan’s permission. This turned out to be a good thing because it allowed for time to move along. For streaming services to be a thing.

Two years ago they approached Mr. Jordan with the pitch of making a long-form episodic documentary out of the footage. They made a convincing argument because he agreed. They would add current interviews with the players into the documentary footage. That would become “The Last Dance”

I am a sucker for behind the scenes authenticity. This footage is revealing in the effort it takes to mount a championship run. The personalities that it takes. Throughout the ten episodes it covers the entire span of Mr. Jordan’s Chicago Bulls career. That coincides with the moment the NBA exploded into an international phenomenon mostly on the shoulders of Mr. Jordan.

Just that footage is worth the time spent watching. But the real attraction is listening to the key personalities on the team talk about the season from a twenty years on perspective. The director Jason Hehir finds a way to give them the room to talk about those days with candor. It is fun to watch them hand one of the players an iPad with footage of what someone else has said. The looks on their face as they hear these things are priceless. It usually is followed with one of the more memorable quotes from that person.

This may be one of the greatest sports documentaries ever. I have kept thinking about much of it since I finished watching it. It also appeals to non-sports fans because Mrs. C at first ignored it before she was drawn in. Once the episode of Dennis Rodman leaving on a 48-hour vacation within the season ended she asked me to cue up the next episode. She isn’t a sports fan, so she didn’t know the way the story ends. She enjoyed it as much as any scripted show we watch.

If you need a bit of sports to watch “The Last Dance” can help fill the time until we see a real game.