I am not one who confuses popular entertainment with documentary. Even so I enjoy the entertainments built upon historical events. I spend a lot of time after watching something “based on actual events” determining what the real story was. Most of the time more straightforward with less flamboyant characters involved in the events depicted in the adaptation.

What I have been surprised to find over the four seasons that I have watched the Netflix series “The Crown” is what it has done to my opinion. I know the series written by Peter Morgan plays fast and loose with timelines. Even faster and looser with what they extrapolate happening in the times between public facing events. Yet over four seasons it has also portrayed the members of the British Royal Family as more complex human beings than they are seen as in reality. 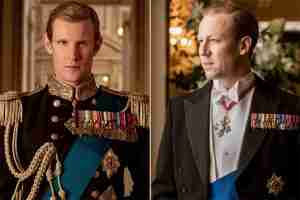 Matt Smith (l.) and Tobias Menzies as Prince Philip in “The Crown”

A good example is Prince Philip. If I had not watched “The Crown” I am unsure whether I would have watched his funeral as it was televised. Prior to the tv series I knew of him as a consort to Queen Elizabeth II. I knew he had pushed modernizations onto the Palace but that is where it ended.

Over the four seasons where he has been portrayed by actors Matt Smith in the first two seasons and Tobias Menzies in the last two. They have made him more of what it was always said he was to The Queen, a partner.

This is where a show like “The Crown” probably comes closest to the truth in the broad strokes of characters. When you have decades of history to sift through the essential character of the person is there to be found. The truth they find about Prince Philip makes him one of my favorite characters within the series.

He is shown chafing at his demotion to eternal public deference as a young man. He is also shown at the same time being one of the few who will not try to manipulate Elizabeth for nefarious purposes. In the later episodes as they enter the later years of their marriage, he is the counterweight to all that she must deal with as monarch.

As I watched the service for the real Prince Philip, I shed a tear. It surprised me. I am sure it is because “The Crown” made me care.