In the mid 1970’s the state of popular music was going in all directions. There were the bands which were adding in symphonic orchestras. Synthesizers were creating the first steps of computerized music making. Punk rock was a repudiation of all of that. I recently ran across a box of the cassette mix tapes I had made during these years. While I found representatives of all that I mentioned above there was another segment of songs which took up a lot of space on my 90-minute tapes; story songs.

Story songs were pop music’s version of setting a narrative to music. These were usually done by the most talented of the singer-songwriters of the day. As radio stations became more flexible these five to ten-minute musical tales found radio airplay. For about ten years these songs all found some success. From Johnny Cash’s “A Boy Named Sue” through to Barry Manilow’s “Copacabana” I could see these people the same way I did when reading a book. I know what Sue, Lola, and Tony look like. Which makes my favorite story song quite different because the first time I heard it wasn’t on the radio. It was in a bedroom sitting with my best friends; my family by choice. 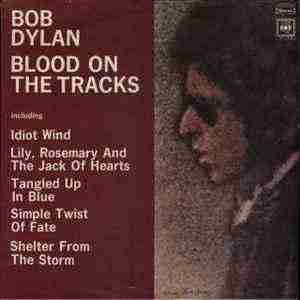 I have three great friends who have known me since I was fourteen. I call them my family by choice. One of them was a guitar player. One of our favorite things to do was to ask him to play songs for us. Eventually we all came to know the lyrics that these would become a sing-along. Although it was only my guitar playing friend who had the singing voice. One of his favorite artists was Bob Dylan. Outside of the songs played on the radio it was he who introduced me to most of Mr. Dylan’s music. Which was what happened the night when my friend played “Lily, Rosemary, and the Jack of Hearts”. I was spellbound by the story being told. I would borrow the album it was on, “Blood on the Tracks”, so I could listen to the song over and over.

The song tells the story of the three people in the title plus one more; Big Jim. Rosemary is married to Big Jim, the diamond mine owner, who is having an affair with Lily who he has given his ring to. In to this step the mysterious Jack of Hearts one night at the cabaret where Lily performs. Over fifteen verses the story of all four people come together in tragedy. Oh yeah, there is a bank robbery going on which is what brought the Jack of Hearts to town.

On the recorded track it is Mr. Dylan and his guitar singing each verse which ends with the Jack of Hearts as part of the last line. He finishes the song by playing the music of each verse on a harmonica. For a song which I came to love because of the live playing of my friend Mr. Dylan only played it live one time, in 1976.

It is also a song which seemingly begs to be made into a visual form of some kind. It has gotten as far as screenplays being written a couple of times but no further. One apocryphal story about the song says Mr. Dylan read the lyrics to Joni Mitchell which then became her song “Diamonds and Rust”. I am not sure I believe it, but I have both back-to-back on my playlist. Because even though there are some modern things like telephones in “Diamonds and Rust” I imagine it as Lily and the Jack of Hearts meeting after many years.

Most of all even though it is Mr. Dylan’s voice in my headphones it really is my family by choice singing together in a bedroom about Lily, Rosemary and the Jack of Hearts.