In Iris and Tubereuse, Le Galion perfumer Paul Vacher wanted to create beautiful soliflores. With 1950’s La Rose he was not interested in adding to the rose soliflores out there he wanted to create a full-throated rose fragrance that would make a larger-than-life version of the bloom. It is said in the press materials that M. Vacher smelled over 70 species of rose to find the right one for La Rose. I am not sure if perfumer Thomas Fontaine who is in charge of the re-formulation of La Rose was able to find that specific species but whatever he has found has a special character to it and makes La Rose feel like one in a million, or at least one in seventy. 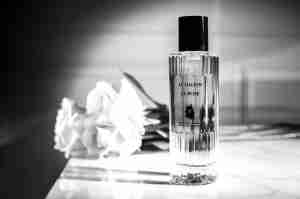 The opening is violet leaf and bergamot. The violet leaf sets the stage like the green surrounding a rose bud. In the heart this imaginary rose bud bursts into life sending out waves of floral sweetness. The rose used here has a subtle fruitiness which is amplified by a bit of peach to allow it to flourish. There is also a lovely dewy quality as if this rose has bloomed in the early morning capturing dew drops within the petals. La Rose finishes with a patchouli and cedar pair of base notes and they are also very pronounced. La Rose is no soliflore it is exponentially rendered rose exquisitely done. 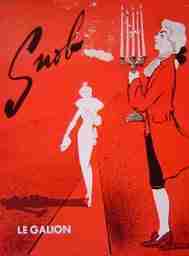 When I sat down with owner of Le Galion Nicolas Chabot at Esxence to try out the line he made a very wise choice on which fragrance to show me first, Snob. First the name itself brings a smile to my face simply because I am a snob about so many things, especially perfume. As I raised the strip to my nose and smelled I immediately understood why everyone was buzzing about Le Galion. Snob was created in 1952 but this could have been created in 2052 because it seems so forward thinking in its construction and aesthetic. Snob at its most basic is a white flower fragrance but it is a perfume for a lover of fragrance because hidden throughout its construction are buried grace notes which add pleasure enough to satisfy any perfume snob. I also have to mention that M. Fontaine’s re-formulation here had to be extremely difficult to achieve this kind of delicate complexity using modern materials.

Snob opens on a pedestrian combo of bergamot and mandarin but just underneath there is something decidedly less ubiquitous as saffron and crisp apple turn the pedestrian into provocative. It was this initial sniff which made me think these Le Galion perfumes were going to be special. The heart breaks out a chorus of floral notes centered on jasmine and orange blossom radiating their indolic beauty. Iris adds powdery contrast while rose adds a hint of spicy floralcy. Together they proudly lift their floral nose high in the air the better to look down on those other mere perfumes. The base is sandalwood and a cocktail of white musks. There is not a moment when I am wearing Snob that this feels like a creation from 62 years ago it feel like it was from 62 minutes ago.

Disclosure: This review was based on samples provided by Le Galion.