When I was at Esxence I actually met Kaya Sorhaindo for the first time. Kaya had been responsible for the creation of Six Scents Perfumes. I had wondered what he was doing and at a stand just inside the entrance I found the answer. He has started a line of perfume under the brand name Folie a Plusieurs. The first collection is called Le Cinema Olfactif. In this collection he asked perfumer Mark Buxton to interpret a specific moment from five independent films. Each perfume carries a time stamp calling out the isolated moment from each film. My favorite of the debut perfumes was the one based on Michelangelo Antonioni’s 1966 film Blow-Up. 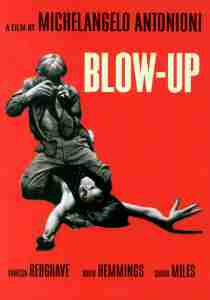 The specific section of Blow-Up interpreted is where the photographer protagonist is looking at an abstract oil painting done by his neighbor who is living with the woman the photographer desires. It is the three conversations he has with this object of desire which lets us know there is still the need for human connection for a man who appears to use his camera as a barrier. While visiting he stares at one of the paintings as the camera stays focused on him. Mr. Buxton described it as, “The oil painting becomes a metaphor for holding onto a small part that is real from the abstract.”

The perfume Mr. Buxton creates captures that mix of outward ennui as inside you fight for real emotional connection. It opens on a swirl of marijuana smoke and the green of the park. They match quite nicely as they give a sign of pleasures illicit and innocent. The heart is where Blow-Up is really interesting as Mr. Buxton chooses to juxtapose the two art forms on display in the movie, photography and oil painting. He has created a very synthetic accord which captures the dark room and the smell of oil paint. These are both odors which carry an acrid edge to them but underneath there is also a subtle sweetness which Mr. Buxton probably makes more apparent than in reality. The final stages of Blow-Up are made up of polished aged wood. This is wood hidden behind a veneer of polish. It, like the photographer, is looking for a way to get out from underneath the shiny surface.

The work done by Mr. Buxton across all five of the Le Cinema Olfactif collection is very good. I will admit my affection for Blow-Up might be because it is also my favorite movie of the initial ones. The very synthetic smelling heart will also not make every perfume lover happy. For me it does capture the mood of the film and I enjoyed it quite a bit. So much so I watched the film again while wearing the perfume one night. I am really looking forward to the coming attractions from Kaya and Mr. Buxton.

Disclosure: This review was based on a sample provided by Folie a Plusiurs at Esxence 2015.