At this point niche perfume has become a fact of life. The discussion has even moved along to whether niche has any meaning anymore. In 1978 the phrase niche perfume didn’t exist. It took the creation of the brand called L’Artisan Parfumeur by perfumer and creative director Jean Laporte to require a way to describe this collection of perfumes that were different. On that day in 1978 when M. Laporte released the initial seven perfumes, perfumery changed. L’Artisan Parfumeur has continued to thrive for the last 37 years. One of the reasons is two of our greatest perfumers, Olivia Giacobetti and Bertrand Duchaufour, produced some of their earliest and best work for the brand. One thing to admire about the brand is it covers the entire spectrum of the fragrance spectrum. There are over 50 fragrances to choose from. To help you here are the five I would start with.

Only three of the original seven releases are still available. Mure et Musc co-signed by Henri Sorsana and Jean Laporte feels as contemporary as it did back in 1978. The herbal citrus open which moves into one of the best fruity floral accords I’ve ever smelled as the perfumers combine jasmine and blackberry. This all rests on a bed of white musk supported by patchouli. Every time I wear this I think to myself this is where niche began.

Olivia Giacobetti would be the perfumer behind most of the releases between1994-2000. Her first release Premier Figuier is what most cite. I actually think her most accessible work for the brand came as she returned in 2001 with Tea for Two. It has Mme Giacobetti’s trademark transparency but the wonderful smoked tea heart makes this a classic. It opens almost boringly with neroli but it quickly heads to the tea room. In the heart smoky tea leaves are crushed with cinnamon, anise, and ginger. This is my favorite tea accord I wear. A honey and vanilla base finishes this version of olfactory tea service. Tea for Two was discontinued for a time but it was brought back in 2014. 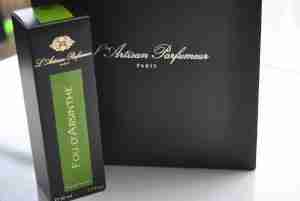 The other perfume by Mme Giacobetti is 2006’s Fou D’Absinthe. In this perfume she works with a little less opacity. Fou D’Absinthe might be one of her more strongly constructed fragrances. She chooses to take redolent wormwood and make it even greener with blackcurrant buds. The heart is a swirl of spices on top of the absinthe accord. It finishes with a resinous pine accord. When people tell me Mme Giacobetti makes her perfumes too light this is where I send them.

As Mme Giacobetti left Bertrand Duchaufour would take up the reins and be primarily responsible for the next ten years 2000-2010. M. Duchaufour’s collection within L’Artisan is impressive and at the time of this writing my favorite, Vanille Absolument, is discontinued. What is left to bring you into the L’Artisan fold is what might be perhaps M. Duchaufour’s greatest perfume, Timbuktu. M. Duchaufour wanted to capture the smells of the African bazaars. During 2004 he had become a master at working with incense. For Timbuktu he used a smoky incense as his nucleus to build the bazaar milieu around. He would add cardamom and mango to represent the spices and fruit for sale. Patchouli, vetiver, and benzoin provide the sultry warmth of the desert.

My final choice, Caligna signed by Dora Arnaud, shows M. Laporte’s vision is still as vital today as it was in the beginning. Caligna is a completely unique mix of fig, jasmine, and olive wood. Mme Arnaud turns her fig herbal by matching it with sage. This makes the fig greener and less ripe. The heart is dominated by a “jasmine marmalade” accord. This takes jasmine and suffuses it with more sweetness without sacrificing the indolic core. In the base she uses a uniquely sourced olive wood to provide an unusual woody finish.

If you love perfume and particularly the current crop of independent niche perfume brands you owe it to yourself to become familiar with L’Artisan Parfumeur. So much of what I think are the core principles of what niche perfume means to me came from this brand. Try the five suggestions above and find out why I believe this.

Disclosure: this review was based on bottles I purchased.