I have been trending to music that makes me smile over the past year. Life was tough enough I didn’t need to confront it in the music I was listening to. Which has meant I have avoided some of the most recent releases from some of my favorite artists. I knew once things turned around, I could catch up when I was ready. I guess that time is now because I downloaded the new album from Lana Del Rey called “Chemtrails Over the Country Club”. While it isn’t optimistic it does remind me of what the world might be like post-pandemic. 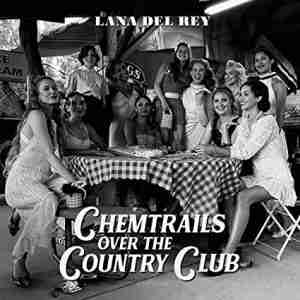 “Chemtrails Over the Country Club” is the follow-up to 2019’s “Norman Fucking Rockwell”. That was named as one of the best albums of the year. What was interesting was the music was danceable while the lyrics were honest slices of life. I wonder how many people heard the lyrics instead of the beat. On the new album Ms. Del Rey pulls back to a sparse arrangement for the songs. This time the lyrics are inescapable. They are also unflinchingly authentic.

These are songs of the battered soul. Mostly from a female perspective. Instead of staying in her hometown of LA this time she writes about the other places in the country. Taken together it shows tough times are out there no matter where you live even “are-can-sass” as she pronounces it on “Tulsa Jesus Freak” even as she wants to return there.

“Wild at Heart” serves as the tentpole in the middle of the album. Ms. Del Rey reminds us “I left Calabasas”. At the same time she claims, “I’m not a star”. I don’t doubt she believes it. She certainly sings it with genuine feeling.

She has been compared to Joni Mitchell for her singer-songwriter abilities. This album closes with a cover of one of Ms. Mitchell’s songs, “For Free”. It is broken down into three verses each sung by a different person. Ms. Del Rey takes the middle verse which seems like it describes how she feels about her fame,

No she doesn’t play for free, but she does tell us the truth, which is priceless.

Disclosure: This review is based on an album I purchased.