Now that the calendar tells me we have moved into autumn I look forward to that last gasp of warmth we call Indian Summer. Usually in the first few days of October after we have had some cold days and nights the weather provides a streak of a few days in a row where the temperature rises back up to near summertime levels. It is always an interesting confluence as the sun strikes down through the leaves changing color on the trees. Instead of running on the beach in shorts I shuffle through fallen leaves. It isn’t really summer and it surely is fall but they co-exist for a few days. Perfume tends to get shuffled into categories based on what I would wear based on the temperature outside. When I received the new Laboratorio Olfattivo Nun I found it to be a perfume which also wanted to live in those in-between times, too.

Owner/ Creative Director Roberto Drago works again with perfumer Luca Maffei on Nun. Their inspiration is not Catholic sisters. Instead it is the Egyptian word which refers to primordial water. The mythology says this water gave birth to the lotus. Sigs. Drago and Maffei wanted to make a perfume which celebrated the lotus and its cycle of sleeping at night only to open at the touch of the sun in the morning. Nun does capture the lotus but it is the inclusion of fantastically rich pear which makes Nun something different. 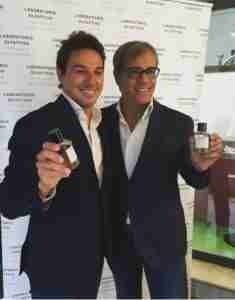 Nun opens with a flash of citrus from both lemon and bergamot. Next comes the pear. This is not that crisp pear that so often shows up in many fragrances. Sig. Maffei has fashioned a pear which is almost overripe. It carries a lactonic undertone making the fruit softer, lusher. Then floating on top is the white lotus which seems to enter on tip-toe. It becomes more defined by jasmine and ylang-ylang. What I like is that instead of being this meditative single bloom floating on a pool of still water. This heart accord is more akin to the lotus bursting open right as the rays of the sun touch it releasing all of the pent up scent in a kinetic burst. At the end there is a bit of an inspirational air as a grouping of lighter synthetic woods and white musks form the basenotes.

For all that this should be a watery summer perfume it really captures my ideal of Indian Summer. The bright notes within Nun are also matched by deeper richer counterparts. Taken together it creates a hybrid which I might think of as Egyptian Summer.

Disclosure: This review was based on a sample provided by Laboratorio Olfattivo.