One thing I want to do with this series is also point out good brands which have good perfumes for a modest price. I would also like these to be easily available but the one I am recommending this month isn’t as accessible as it should be. I became aware of Korres through my participation on the online perfume forums. The first release was Pepper Jasmine Gaiac Wood Passion Fruit. I was completely enthralled with this peppered jasmine. I still wear some during the summer. This was released at the end of 2009 yet finding a bottle is problematic.

Korres is a Greek brand which is part of its US distribution issue I think. What this leads to is re-stocking after inventory sells out seems to be problematic. Which is too bad because each release wears its main ingredients on its label. You almost know if you’re inclined to like it before you even pick up a bottle. There is an admirable WYSIWYG aspect of that as there is not one of these where the named ingredients don’t sing out. Only in the case of a few of them do I know who the perfumer is. There is no evidence at all who is doing the creative direction although the brand has been founded by George and Lena Korres. I would love to give credit to the creative team because these are worth knowing who is responsible for them. For the purpose of the column I am going to focus on the last new release I received; Blue Sage Lime Fir Wood. 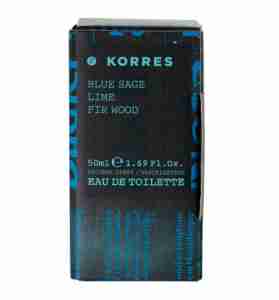 As I mentioned the name tells you what you will be experiencing if not in the order you will detect it. To show this it is the lime that comes first. It is supported by grapefruit and given a sprightly green herbal contrast by mint leaves. The heart uses geranium to draw out the green quality of the mint before the sage and fir arrive with a flourish. You really have to enjoy sage and fir because they are here at full volume. I like the way all of the Korres perfumes are not attempting to shy away from their focal points. The base is patchouli and vetiver also not presented in a delicate way.

The apothecary influence which is paramount for all of the Korres releases also leads to powerful perfumes. If you are not a fan of this style it is probably not worth the effort to track Korres down. If you do like the occasional powerhouse you can find many of the Korres releases on the online auction sites as well as every now and then the bigger perfume e-tailers. If this sounds good make the effort I think you’ll be rewarded with something nice for a good price.