One of my favorite television shows is “Killing Eve”. It is a wild story about two women who are attracted to each other’s compulsions. One of the women is Villanelle who is a killer for a shadowy organization called The Twelve. She carries out hits as ordered. The Eve of the title works for British Intelligence and is responsible for tracking her down. In the recent third season there was a perfume moment which immediately made me laugh.

Villanelle has just come back to London planning to see Eve. She walks into a perfumery and asks the perfumer for something specific. She says, “I want to smell powerful. I want to make people gag with it….I want to smell like a Roman Centurion who’s coming across an old foe, who in battle once hurt him greatly. But since then, the Roman Centurion has become emperor, and is now powerful beyond measure.” The perfumer takes that in and drolly asks, “Maybe something more woody?” 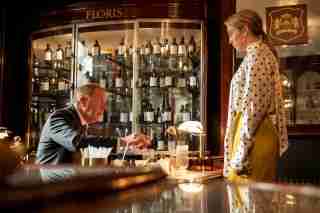 It tickled me more than the average viewer because I imagine this conversation happening in marketing departments across perfumery. Then I began to think is there something which might fit Villanelle’s description. I want to smell powerful made me think powerhouse. Roman Centurion had me thinking sweaty leather. Something more woody felt like it had to be oud. So I was looking for a powerhouse leathery oud. It was sitting there right in my samples to be reviewed box, Montale Bengal Oud.

Montale has become known for the wide range of oud perfumes in its extensive collection. Bengal Oud fits into a continuum of many good leather ouds which came before. This is part of a house style which has served it well.

Bengal Oud opens with that smell of sweaty leather. The sweaty part of it comes from the early moments of the oud interacting with it. There is a fascinating intermezzo of rose, iris, and orange which breeze across the stronger ingredients. It is as if the new emperor is sitting in his old Centurion armor while surrounded with the genteel trappings of power. It takes a turn for the more woody as vetiver picks up the oud and escorts it to sandalwood and amber waiting in the base.

Bengal Oud has 14-16 hour longevity and above average sillage (not to the Villanelle desired gag worthy level though).

If you have other leather ouds from the brand Bengal Oud provides subtle, but significant, changes. It would be up to a perfume lover to know if they want more of a good thing. When I wore it imagining Villanelle wearing Bengal Oud when she caught up with Eve seemed perfect.

Disclosure: This review is based on a sample provided by Montale.