Yes, I have many thoughts about the movie, but I want to see it one more time before diving into all of them. I have found equally as inspiring the music for the movie which is what the topic will be for this column.

One of the things I admire about albums by innovative artists who interpret a movie is it provides a different artistic perspective on the same material. One of my favorite Prince albums is his music inspired by the first Tim Burton Batman. It was the work of a musician firing on every creative cylinder. The same has happened for Black Panther: The Album as an equally precocious talent, Kendrick Lamar, adds an authentic musical signature to a movie which lives its authenticity. 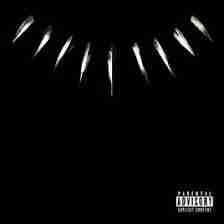 When director Ryan Coogler approached Mr. Lamar about providing a song or two he asked if he could see the movie. When Mr. Coogler showed him what he had Mr. Lamar wanted more than just a couple songs he wanted the whole thing. He has provided a fantastic musical companion to the movie.

In the hip-hop world of 2018 it is all about collaboration and Mr. Lamar and Sounwave took on the majority of the production duties pulling from a number of current stars to form a killer line-up of talent.

The most recognizable song is the one which plays over the end credits “All the Stars” with Mr. Lamar and SZA. Like I mentioned above it is the songs which pick up threads from the movie and elaborate on them which connect with me.

“King’s Dead” might as well be the villain of the movie’s Killmonger, theme song. The lost son of Wakanda full of swagger. “Pray for Me” is the internal dialogue of T’Challa as he fights for his kingdom. Every song on the album does this. I had listened to it enough that when I saw the movie for the first time I was cued into picking up the musical backing vocals to the action on screen.

Black Panther: The Album is the kind of collaboration that adds to the enjoyment of the very movie which inspired it. Just another reason for the success of the overall enterprise.