When I got my first real job in September of 1984 there was one thing I was looking forward to very much. The chance to read for pleasure, again. Of the reading list which had been building over time in my head were a lot of the foundational murder mystery series. I wanted to read them first book to latest in the order they were published. A literary version of binge watching. In those days it was hard to find the earlier releases of many of the longer-lived series. I was also persnickety about not starting a series until I had obtained all the books. I found that some of the series which had started in the 1950’s-60’s the earliest releases were out of print. I needed to find a store which might have them. Which is how I came to meet Kate Mattes. 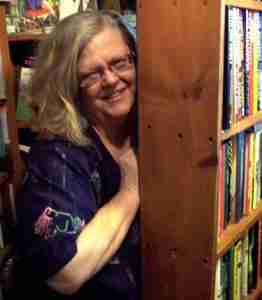 Kate had opened the bookstore Kate’s Mystery Books in Cambridge, MA in 1983. I had heard that she might have the books I was looking for. I drove up to see if it was true. I went on a weekday so I could poke around without the store being crowded. When I walked in Kate greeted me then explained the layout of the store. Each shelf held a particular genre. I had a list. She had almost everything on it. There were a couple of missing pieces. She assured me she could find them. Throughout the couple of hours I spent in the store we chatted about all things mystery related. It was a process I would repeat every couple of months.

That would change when I moved to Boston for a new job. We bought a house walking distance to the store. Instead of a frequent customer I became friends with Kate. I was there to help her when she needed it. She was there to add some fun to my life. If she needed a hand while an author showed up to sign books early. She knew I could be there in a few minutes. Listening to Kate talk to a who’s who of American mystery authors was always like a personal interview which I absorbed as I handed the next book to the author to sign. I learned so much about different writing processes, the business of getting published, and anything to do with plotting in those sessions.

Every year culminated in the annual Holiday party where I was one of the assistant “elves” helping get books signed as the store overflowed with authors, fans, and books to be signed. It was like being part of the best party in town for those who read books.

There were so many days where I sat in the chair talking with Kate about everything. We had moved far beyond just books. When she decided to close the store in 2008 so she could retire I knew it was coming. I remember helping her pack the last boxes as we walked out the door for the last time. We looked back at the empty shelves with eyes glassed over with tears.

Kate was able to find the retirement she wanted in Vermont. Two weeks ago she passed away from long-time health issues she had dealt with for as long as I knew her. When I found out I looked at the bookshelf where all my mysteries are shelved. Thinking most all of them are there because of her. This time the tears in my eyes were because of a full bookshelf.

I wish you peace Kate Mattes…..and a Heavenly selection of killer mysteries to read.