Those of you who read this column in previous Holiday seasons know I have a different idea at what makes a Holiday movie. I love the classics, but I also have a group of misfit toys which are odd stories that strike the right tone for the Season. One of those on my list is 1990’s Edward Scissorhands.

Edward Scissorhands was released in the Holiday season of 1990. Director Tim Burton was able to make this weird little story because of his success with the first “Batman” movie a year earlier. It falls in line with most of Mr. Burton’s eerie oeuvre. I watch it every year because it is a story of acceptance in the face of oddity. 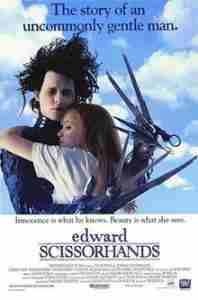 Mr. Burton was able to fend off the studio wanting a bigger name actor to play the title role. He had already decided he wanted Johnny Depp. Mr. Depp was still in the part of his career where he was a regular on the TV show “21 Jump Street”. He was seen more as a pretty face not a serious actor. Mr. Burton had seen something others had not. He had to stand firm to keep his first choice. Thankfully he did. I can’t imagine any of the other actors; Tom Cruise, Tom Hanks, or Gary Oldman, doing this role. There are many creative teams which get each other. It is true in filmmaking as it is in perfume. a shared vision leads to something special. That was the case with Mr. Burton and Mr. Depp.

The plot is pure Grimm’s Fairy Tale; the old unabridged kind. Edward Scissorhands is a creation of a scientist who dies before giving him hands. It leaves him with automaton hands of sharp objects. He is discovered by a young woman, Kim played by Winona Ryder, who rescues him from his solitary life; bringing him into her neighborhood. As Edward sees this world there are some savage digs at the cookie cutter nature of housing subdivisions. Mrs. C and I have called these kind of developments “Edwards Scissorhands Land” anytime we run into one. There is begrudging acceptance as Edward shows his skill with his bladed hands. He makes topiaries which serve to differentiate the identical homes. He uses his hands for other things which gather more fame to him engendering jealousy in others. Of course as in any fairy tale there is tragedy. By the end Edward is left to live the same solitary experience we found him in at the beginning. The difference is what he experienced gives him a new perspective. Now he makes ice sculptures with his hands. There is a beautiful bittersweet ending.

I love it because it is a story of finding the man within the outward monster with a wintry theme. If you want to join my goofy Holiday Movie Club queue up Edward Scissorhands.