I remember when I was a teenager, in the early 1970’s, listening to rock music at too loud a volume inevitably an adult would come and tell me to turn it down. If the adult was feeling particularly feisty on the day they might follow the request with this old chestnut, “you know this music won’t be around in 40 years.” It was a frustrating argument because rock had only been around 10-15 years at that point. How could you rebut that? It was also enough to plant the seed of doubt to whether I would still be listening to it in 40 years.

My iTunes library is a living document of my favorite music of that time which I still listen to. The answer is now yes this music is still around 40 years later. It has even matured to the point that there are the classic standards which make up those earliest days. I was reminded of how the best of those early songs have the same timelessness about them as any musical form when watching the ending of the Olympics which led into a preview of The Voice. At the end of that preview the current panel of judges; Adam Levine, Alicia Keys, Blake Shelton, and Miley Cyrus did a version of the song Dream On by Aerosmith (link here). It is certainly an appropriate song to be sung at the beginning of a singing competition. They did an incredible job. It reminded me of the legacy of rock music and how far it has come. 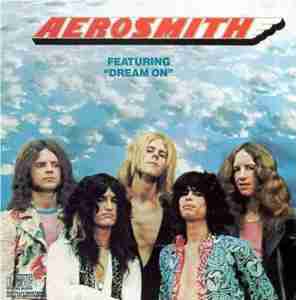 Aerosmith released Dream On in 1973 on their self-named debut album. It would be the band’s first major hit. That the band still exists 40 years later also shows the longevity of rock music. Aerosmith is particularly known for the lead singer Steven Tyler and guitarist Joe Perry. Dream On shows off both of them at their best. There are few lyrics in Dream On and most of the song is taken up by Mr. Perry’s guitar playing. Lots of rock bands had songs which started off with picked out quiet sections of plucking which would eventually progress to full-on shredding of the guitar. Dream On does this and I remember listening to this the first time and thinking how good the guitar player was. I also was taken in by the range of Mr. Tyler’s vocals. Dream On starts off maybe a beat or two faster than spoken word. Just as Mr. Perry does with the guitar Mr. Tyler slowly amps up the vocals until the song crescendos with multiple implorations to “dream on” sung in falsetto. It all ends on a very of the day giant gong being struck.

Dream On like all classic music has timeless lyrics which apply no matter when they are sung. I know it is impossible but this week I kept wishing I could inhabit my 13-year old self listening to Dream On and when that adult made their prediction of its impermanence that I could just smile knowingly. And turn it up while singing along with Mr. Tyler in my less accomplished falsetto to “dream on”.