As we approach the completion of the first twenty years of this century I have been peeking backward. It reminds me of the days when I was cycling, and I would start pedaling up a gradual grade. After some time I would glance over my shoulder in surprise at how far I had climbed. Because I am focused on the newest things, I need something to make me look back to see how far niche perfumery has come. Even though they are famous brands today they all started at the bottom of a hill they didn’t know if they could climb. Which is why I want to mention some of the first releases in those lines in this column. Jo Malone Nutmeg & Ginger could be said to be the first Holiday Limited Edition niche perfume.

Anyone who knows perfume knows about Jo Malone. They were one of the first big niche perfume brands to have large-scale success. Where they started in 1990 was someplace quite different. 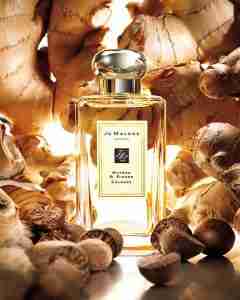 Jo Malone was an aesthetician working in London. In appreciation for her first 20 clients she decided to make a special fragrant present. A Festive Season treat built around the spices of nutmeg and ginger. Even thirty-plus years ago the word got around and in 1990 she would release the first Jo Malone perfume, Nutmeg & Ginger. In so many ways right from the start the brand aesthetic was in place. It is quite amazing to realize how this simple perfume doesn’t feel outdated. It feels just like it did in the beginning, a scented Holiday treat.

It is a perfume built around the two named ingredients each filled out into accords. Ginger is flanked by lemon and neroli. They provide a softening effect to ginger which can be too zingy. They add a citrusy floral wreath around it. The nutmeg is given cinnamon and clary sage as its partners. The cinnamon and nutmeg conjure up Holiday cookies while the sage gives a green holly-like effect. A lovely creamy sandalwood wraps it all up in a sweet creamy woody embrace.

I know Jo Malone as a brand is not Under the Radar, but I suspect few of you have thought of Nutmeg & Ginger for a while. That makes it worthy of being given some current attention. Especially if you’re looking for a good fragrance to wear during the Holidays. Just like it was created for thirty years ago.

Nutmeg is one of the smells of the Holidays for me but I also realize it is one of my favorite perfume notes for the rest of the year as well. If I really wanted to stretch this point to its breaking point I could say without nutmeg my perfume journey might never have begun. If you want to spritz a little nutmeg on here are five of my favorites.

It was the nutmeg that lured me over to the woman spraying strips with Calvin Klein Obsession for Men. The 1986 perfume composed by Bob Slattery uses nutmeg as the leader of the spices in the heart. I knew when I smelled it wafting to my nose it smelled different than other masculine designed spice perfumes. Mr. Slattery adds in clove, coriander, and sage along with lavender and myrrh. It ends on a traditional woody base of sandalwood and vetiver. It is that spicy heart which still appeals to me almost thirty years later.

The most famous nutmeg perfume is likely Jo Malone Nutmeg & Ginger. At first created as a little present for Ms. Malone’s clients it would be the perfume which launched one of the earliest successful niche brands. Like all Jo Malone fragrances, you get a lot of what it says on the bottle as ginger rides in on the shoulders of neroli and lemon to meet nutmeg embracing cinnamon and clary sage before ending on a sandalwood base note. Everything that is admirable and what made Jo Malone something of a trendsetter is on display right from the start. 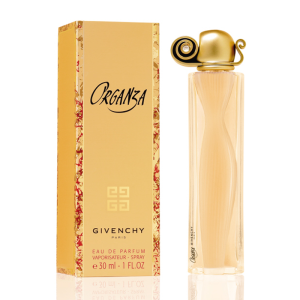 Sometimes I want my nutmeg as a side to some white flowers. My favorite white flower nutmeg combo plate is 1996’s Givenchy Organza created by a committee of Sophia Grojsman, Nathalie Lorson, and Sophie Labbe. Organza takes a green sappy accord and dives right into a heart of luscious gardenia and jasmine. The nutmeg forms a spicy sweet woody base with vanilla and cedar. You might think white flowers can’t be tamed with nutmeg, Organza proves that hypothesis incorrect.

A fellow forum poster on Basenotes gifted me a sample of Frapin Caravelle Epicee. If Obsession for Men started the journey Caravelle Epicee was when I completely fell down the rabbit hole. I frequently describe this 2007 creation by perfumer Jean-Marie Faugier as the hold of a Dutch East India company boat just after it is unloaded. Nutmeg and coriander are the first of many spices which form the olfactory spics ship. Thyme, allspice, pepper, and tobacco form the manifest. The smell of the wood of the ship is infused with patchouli. This is as close as I have to a single favorite perfume.

Carner Barcelona Rima XI composed by perfumer Sonia Constant is one of the softest spicy perfumes I own. It is a soft place to lay one’s head and allow nutmeg, cardamom, saffron, pepper, cinnamon, coriander, and mint to surround you in a spicy haze. You almost don’t notice the equally quiet jasmine and sandalwood but they make Rima XI the complete perfume that it is.

This was bit of a journey down my perfume lover’s memory lane with the scent of nutmeg accompanying me.

Disclosure: This review is based on bottles that I purchased of all the fragrances mentioned.