I was of mixed emotions when the news was released about perfumer Christine Nagel heading to Hermes, to join Jean-Claude Ellena. I have been very impressed with her tenure as de facto in-house perfumer at Jo Malone since she began producing fragrances there in 2010. It is these releases that convince me that Mme Nagel will be an easy successor to whatever legacy M. Ellena leaves when he retires. Before Mme Nagel headed over to Hermes she released three new fragrances for Jo Malone called the London Rain Collection; Rain & Angelica, Wisteria & Violet, and Black Cedarwood & Juniper. They are all excellent examples of what Mme Nagel has brought to Jo Malone for the past four years and what she will bring to her future.

Rain & Angelica is the one which most evokes the idea of a springtime rain. It has that clean freshness that an April shower brings to the world. Mme Nagel opens it with an ozonic rain accord matched with a cocktail of aldehydes. A bit of lime and pink pepper add some of that earthy spiciness that also seems to accompany the smell of a spring thunderstorm. The florals in the heart are the angelica but there is also a dewy rose and a pretty straightforward iris. All of this ends on a wet greenery accord courtesy of vetiver and amber, but mostly vetiver.

Wisteria & Violet is the garden after the rain and as the sun has returned to warm the day back up. The beginning is a watery accord of lemon, melon, and waterlily. Thankfully the waterlily is the more prominent note over the melon. The waterlily adds a watery green floralcy that is intensified with the addition of wisteria and violet. The titular notes really take over at this point and for a good while this fragrance is wisteria and violet by themselves. Over time the patchouli does come to the foreground but it is a greener more herbal patchouli. A bit of white musk adds a final sheer layer to the end of this. 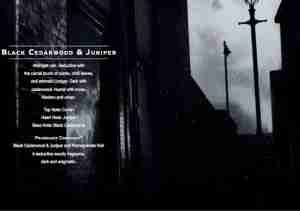 Black Cedarwood & Juniper is the one that totally surprised me. If I handed this to you in an unmarked vial and asked you to name what perfume house it came from I think you would be guessing a long while until you said Jo Malone. Black Cedarwood & Juniper is very modern in its construction as Mme Nagel goes for a feel of the midnight streets of London after you’ve been out to the clubs or a late dinner. It opens with a fascinating combination of cumin and chili leaves. I am pretty sure this is the first time cumin has found its way into a Jo Malone fragrance and I don’t think I’ve ever smelled chili leaves before. What this does is take the very sweaty nature of cumin and cover it over with a green heat from the chili leaves. The result is a, very Jo Malone, non-confrontational cumin. It is greener and the cumin’s more rambunctious edges are blunted by the slight chili pepper spiciness of the chili leaves. These top notes remain as the cedarwood and juniper arrive. I would say it is the cumin and chili leaves which turn the cedarwood dark. There is a hint of nutmeg along with the juniper berry. It makes this feel like a very dry exotic martini for a while. The base notes add in some leather and moss to finish off this very unique, for Jo Malone, fragrance.

All three London Rain fragrances have 8-10 hour longevity on me and average sillage.

There is a fourth London Rain fragrance but it is a re-labelled version of 2007’s White Jasmine & Mint which was composed by David Apel and Pierre Negrin. The three new ones by Mme Nagel are all very good but it is Black Cedarwood & Juniper which is clearly my favorite. I have worn out my sample and will be buying a bottle very soon. I’m not sure if these are the last compositions we will see from Mme Nagel for Jo Malone but if they are she is leaving on a high note and displaying the potential for her future.

Disclosure: This review was based on samples of the Jo Malone London Rain Collection I purchased from Surrender to Chance and I received from the Jo Malone Counter at Nordstroms.