Later today the Oscars will be handed out for movies released in 2016. Part of the fun of watching the ceremony is having rooting interests. I’ve already mentioned my ambivalence towards favorite “La La Land” as well as my enthusiasm for “Arrival”. As much as I’d like to see the latter win Best Picture and the former to get shut out completely there is one movie which I think has a shot at blocking “La La Land” from the Best Picture Award; “Hidden Figures”. 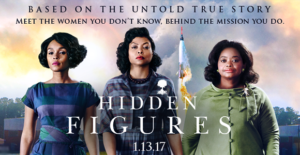 Hidden Figures is the story of three African-American women who worked for the National Aeronautics and Space Administration (NASA). It takes place in 1961 as the United States were beginning the Space Race in competition with the USSR. Each country trying to outdo the other by being the first to do something in space. By 1961 the Russians had placed the first satellite, Sputnik, and the first human, Yuri Gargarin. At the Hampton, Virginia NASA facility was where the mathematicians and physicists were gathered to come up with the scientific foundation necessary to have the US catch-up. When it comes to efforts like this the prevailing prejudice of the day is tamped down in the desire for success. So, it was for the women at the heart of this movie. 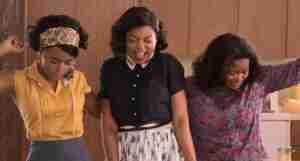 The women are part of the “computers” team who assist all over the facility as needed. They are segregated in to their tiny cramped office overseen by supervisor Dorothy Vaughn, played by Octavia Spencer. Ms. Vaughn is not given the title even though she does the same work as her boss Vivian Mitchell, played by Kirsten Dunst. Two of her staff are brilliant and are given assignments where those skills can be used. Kathryn Goble, played by Taraji P. Henson, is added to the group which is doing the calculations for the first manned flight. The challenges of being the first “colored” member of the team is what her story entails. The other story we follow is that of Mary Jackson, played by Janelle Monae, who is assigned to the capsule design team. Her white supervisor encourages her to fight for her right to attend an all-white school to take the course she needs to continue her education and become an engineer.

Director Theodore Melfi who also co-wrote the screenplay doesn’t take Hidden Figures any place you can’t see coming from a mile away. Which didn’t matter to me because the actresses embody their roles so seamlessly while each story provides a different angle on the state of race and gender relations in 1961 America. Even though I know the story will have a happy ending the journey to it is so entertainingly told it was a joy to spend a couple hours in the dark watching it.

Over the Holidays I try and see as many of the Oscar candidates as I can. I saw Hidden Figures on the same day I also saw “La La Land”, the movie which has resonated since that day is Hidden Figures which is why I am hoping when they open the envelope for Best Picture that’s the title on the card inside.