There are actors who do such a great job in a role I want to see them in something like it again. One of those is Rosamund Pike who starred in the 2014 movie “Gone Girl”. She plays a delightfully duplicitous character trying a unique way to end a marriage. She has done plenty of things including a great turn as Marie Curie in “Radioactive” since. I just wanted her to play another morally ambiguous badass. The new movie “I Care A Lot” delivers.

Ms. Pike plays Marla Grayson who has built a career of becoming the legal guardian of elderly people. That might sound nice, but she does it for all the wrong reasons. Once she is given her guardianship, she uses it to sell off all their belongings. She is a shark and in voiceover narration she lets the audience know it. The first act of the movie is the mechanics of how easy it is for her to do this. In cahoots with unethical physicians they can turn anyone into a mark while taking everything away from them. 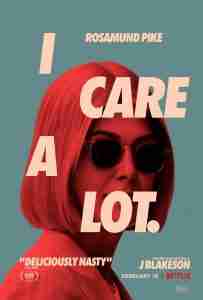 The movie then asks the question, “what happens when you do this with the wrong target?”. Marla is given the head’s up on a “cherry”. Slang for an elderly person with no family. The rapid-fire sequence of how Jennifer Peterson, played by Dianne Wiest, goes from beautiful home to a room in a nursing facility is frightening. The twist that the rest of the movie will play out upon is she does have a son. A Russian Mafia kingpin who is unhappy to find out his mother has been taken from her home. The mobster is played by Peter Dinklage.

The movie is then a game of two criminals facing off in a game of survival. All three actors I mentioned are pitch perfect in their roles. The movie is full of twists and turns right up until the end. This is one of those movies where among the main characters there are no good guys. Yet just as it was in “Gone Girl” Ms. Pike plays this kind of part so well I end up rooting for her.

This is also a movie which exposes just how easily the system allows for our senior citizens to be taken advantage of. The early part of the movie as you follow Marla indicts the way the laws are set against some of the most vulnerable in our society. It becomes a different movie once it becomes Marla vs. the mobster. Which is where it spends most of its time.

If you also wanted to see Ms. Pike at her nihilistic best again “I Care A Lot” is just for you.