Ever since we moved to the greater Washington DC area I have been surprised at how much politics is woven into the fabric of the region. Even out in Poodlesville which is 18 miles from the front gate of the White House the feel of living in the Nation’s Capital is different from everyplace else I’ve lived. Over the last seven years there have been moments where the voice of protest has been raised up. To see the numbers of people who gather on the Mall to speak up about their issue almost every month is something which makes me happy to be an American where this takes place. It is the essence of being a vital Democracy; the opportunity to step up and speak up. Independent perfume brand House of Cherry Bomb has decided to add scent up to that with the release of Pussy and Resist. Perfumers Alexis Karl and Maria McElroy have composed what they call “Revolution Perfume” as they capture the idea of this current generation of protest. 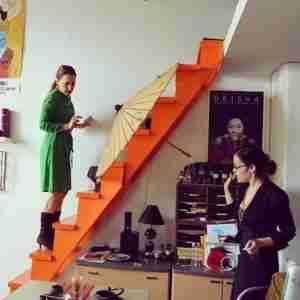 On January 21, 2017 the world became acquainted with the pink knitted cap known as a “pussy hat” as millions of women worldwide stepped up and made their voices heard. Pussy is a perfume meant to capture that sense of women’s advocacy. The perfumers choose to display that by using a deep floral accord clenched in a leather fist.

Tuberose comes right to the foreground as fig and honey accentuate this forceful floral. The leather accord comes forward and wraps itself around the tuberose. Encasing it in an animalic frame. The animalic part intensifies over the final stages with amber and musk abetting that.

Resist is an homage to the last fifty-plus years of active non-violent protest in the US. Every march has taken place on the streets. The smell of the urban landscape is what the perfumers capture by using sets of accords meant to capture pieces of that.

Resist opens with a duet of metal and cement; a true cityscape in scent. This is marching among tall buildings hearing your voices amplified against the facades. This scent then shifts to a small hopeful jasmine before the march becomes more active as smoke and oud show resistance does not mean unopposed.

Pussy and Resist have 8-10 hour longevity and moderate sillage.

Of the two perfumes Resist works best for me as both statement and as a perfume. The smell of the streets is nicely captured which is where most resistance takes place.

If you’re interested in adding “scent up” to those moments you want to stand up and speak up these two perfumes might be the right choice.

Disclosure: this review is based on a sample provided by House of Cherry Bomb.