I really enjoy finding new wine regions to dive into. Last summer I discovered the South African Walker Bay region. At that time, it was through their chardonnays. As I’ve mentioned in the past I have issues with the way many American chardonnays go about tweaking their wines to accentuate the woodiness or the buttery and in the worst cases both. It is something which has become worse over the years. Which means I must look elsewhere to find balanced chardonnays in which the winemaker has the trust in the grape to let it be the balanced wine it can be. I complain about this so much that my local wine store invited me to a tasting of the new chardonnay releases from Walker Bay. I was bowled over as these hewed closer to French white burgundies than the American version. The Hamilton Russell Winery was the chardonnay I liked best. As I spoke to the store owner he mentioned that the pinot noir from Hamilton Russell was even better. 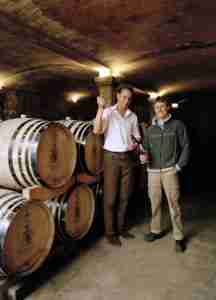 Walker Bay is located on the south coast of South Africa. It is known primarily as one of the premiere whale watching sites in the world as Southern Right Whales gather there in the winter and spring. What it also does is provide a moderating warm sea breeze to the cooler air temperatures in the wine growing valley of Hemel-en-Aarde which is where Harrison Russell is located. The oversight of the vineyard has been kept in the family since its founding in 1979. Currently Anthony Hamilton Russell is the current owner-operator. He has been working exclusively with winemaker Hannes Storm since 2000. It is this partnership which has turned these wines into what they are.

The chardonnays carry a supernatural clarity and I recently found out the reason why. The oldest vines produce grapes which are most prone to picking up the woody aspects of being aged in barrels. Mr. Storm came up with a brilliant idea of aging those old vine grapes in clay amphorae made from the clay on the estate. It took some trial and error but the most recent three vintages have about 3% of the grapes used from these amphorae. It is this choice which adds the fresh quality to the chardonnays. It tones down the woody nature while they purposefully keep the malolactic fermentation down as well. It results in a chardonnay with crisp fruity openings. They all have this lovely apple and peach early phase before heading to a subtly creamy finish. The 2013, 2014, and 2015 vintages are all examples of this style of chardonnay. 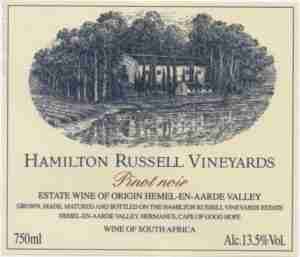 When I was told the pinot noirs were better, based on the evidence on the recently released 2015, I have to agree. Just like the chardonnays the pinot noir is very like French Burgundy red wine. Mr. Storm chooses to rack the wine once which is the process of moving it using gravity from one barrel to the other. This technique is meant to open up a wine which the winemaker considers closed off from its aromatic potential. I can’t speak to what it was like prior to adding racking to the process because it began back in the 2010 vintage. What I can assess is the 2015 has reached the peak of its aromatic potential. What I also think it does is makes this wine very soft on the palate as the plummy red tea early taste deepens into a spicy toasted wood finale. This 2015 vintage is spectacular in its evolving complexity.

The Hamilton Russell wines are not best buys as they are generally available for about $30 for the chardonnay and $40 for the pino noir although I think they are great value for their price considering the cost of their Burgundian counterparts. If you’re looking for a nice bottle of wine for a special meal either of these are great choices.