I think my favorite part of drinking wine these days is discovering a new region for myself. It is like discovering a new perfume brand the exhilaration comes in the exploration. Like perfume it all starts with a sample. I was at my local store and asked about something to go with my Easter leg of lamb. I was asked if I’d tried the Chilean carmeneres, which I had. It didn’t seem like the best match, but I was told of a small region in Chile that takes the grape and treats it like they do for Amarone in Valpolicella, Italy. That got my attention because Amarone della Valpolicella is exactly what I would pair with lamb but for just a dinner at home I wanted something more moderately priced. Enter the Chilean version from the Elqui Valley; Vina Falernia Carmenere. 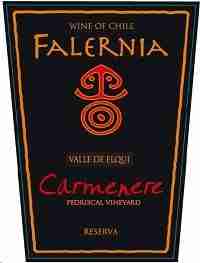 The Elqui Valley turns out to be one of the more unique vinicultural areas in the world nestled between the Atacama Desert and the Andes while being close enough to the Pacific to get the cooling sea breezes. It is also unique because there is almost no precipitation or below-freezing temperatures. The saturated sunlight matched with the altitude creates a singular terroir for wine.

Vina Falernia was founded in 1999 as an off-shoot of the Olivier family’s production of table grapes and Pisco fortified wine. Aldo Olivier realized there was potential for winemaking. He hired winemaker Giorgio Flessati and they began. They planted predominantly Syrah and Carmenere grapes. Because of the climate Sig. Flessati thought it would be ideal to try and emulate the Amarone-style of harvest.

That style is to allow the grapes to dry out on the vines by leaving them there for up to two months past peak harvest. Sig. Flessati can shorten what takes four months in Valpolicella because of the intense sunlight and the moderate temperatures. 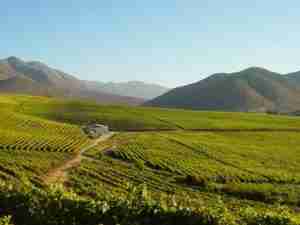 The wine which follows the Amarone-style procedure is Vina Falernia Carmenere Reserva. The current vintage available in my area is the 2015. This vintage is made from 60% of the dried on the vine fruit with the remaining 40% made up of the grapes harvested earlier. It turns out to be a lovely stand-in for the much more expensive Italian version.

The 2015 vintage is a contrast to the aggressively herbal carmeneres from the rest of the Chilean viniculture areas. By using the dried fruit that seems to have been tamped down. What remains is a deeply satisfying mixture of cherries, chocolate, and cinnamon on the palate which are all also evident on the nose.

This turned out to be just what I was looking for as it was ideal with Easter dinner. In my area it goes for $14/bottle. Which is an outstanding value if you compare it to an Amarone.

I am going to seek out more of the Vina Falernia wines as I can. There is also one other vineyard in Elqui Valley called Mayu and is run by a cousin of Sig, Olivier. If they’re all as good as this one, it is yet another of the South American regions producing quality wines at moderate prices.