There are so many perfumers who work so very hard to form a brand identity. Then there are others where it feels like an organic extension of who they are. Maria McElroy created her aroma M perfume line in 1995 as an extension of her affection for Japanese art and incense. Over almost twenty years Ms. McElroy has made eight perfume oils and four eau de parfums all meant to portray a different geisha. Each perfume like the variation in kimono or makeup had a distinct personality. I admired Ms. McElroy’s dedication to letting her muse take her where it will. Geisha O-cha was a traditional Japanese tea ceremony. Geisha Marron was the French courtesan who formed a mismatch of her Occidental features while wearing a kimono. I only discovered the line in 2011 and it has become one that I keep an eye on because of Ms. McElroy’s singular style. Her latest release Camellia is another entry in her impressive collection.

Ms. McElroy had initially developed Camellia as a line of beauty products; hair oil, face oil, and bath oil. It is said that geisha use camellia oil to remove their make-up and Ms. McElroy was inspired to make her own formula of that product. The funny thing is for a line known for its perfumes there wasn’t an accompanying Camellia perfume oil. After multiple requests Ms. McElroy capitulated and designed two concentrations; perfume oil and eau de parfum. As has been the case with the previous EdP concentrations I find I prefer the oil based formulations better. There is a deeper interaction with the perfume oils and the EdP’s seem to become so expansive that they lose some texture along the way. It is purely a matter of preference as both concentrations are wonderful. I am going to focus on the perfume oil for the rest of this review. 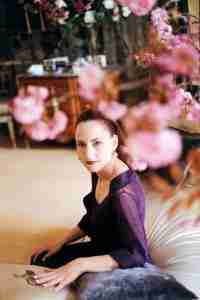 My imagination takes me to the table where a geisha sits at the end of the evening. She looks in the mirror and uses her camellia oil make-up remover to uncover the person beneath the façade. As the woman underneath the geisha reveals herself she unpins the gardenia from her hair and removes her kimono still holding the scent of the frankincense burning in the main areas of the house. The rose and jasmine also from her hair lies next to the gardenia. As she lies down to sleep the remnants of the camellia oil reminds her who she is before closing her eyes.

Ms. McElroy has made a fantastic deep floral fragrance with Camellia. She opens it with the camellia essential oil on display from the first moments. In those early moments geranium and neroli provide harmony.  The geranium adds a green transparency, the neroli adds a hint of indoles. The heart is a narcotic mix of gardenia and camellia. This is as potent as an opium pipe as it fills every bit of my senses. Ms. McElroy manages to make something encompassing without being overwhelming. Camellia ends on an austere slightly metallic frankincense. The incense really has to push hard to be noticed and it takes hours before it really gains some traction on my skin. Once it does the gardenia camellia and frankincense usher Camellia through its final paces.

Camellia is a perfumed homage to a geisha at rest. It feels like the most personal perfume Ms. McElroy has composed to date.  It is the truth behind the illusion. I always prefer the truth.

Disclosure: This review was based on samples provided by aroma M.