Ever since I began paying more attention to everything about perfume, I also started noticing the less pleasant smells around me. There is a perverse part of my nature that there are smells I like which many would classify as unpleasant. I think it is different for each of us. I was thinking about this while I was also figuring out what I wanted to write about for Fourth of July. It was as obvious as it could be.

Every few summers while I was growing up, we made the obligatory Miami to New York road trip to see my grandmother. It was a three-day affair to get up there. On the return trip there was always an obligatory stop at a giant roadside attraction/hotel called “South of the Border” in Dillon, SC. If you’re an east coast child who took road trips in the 1960’s and 70’s you saw the billboards full of silly puns along with how many miles it was until you reached it. We stopped because it was where we could legally buy fireworks. 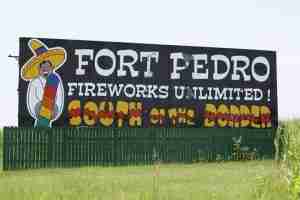 When we stepped into the store the smell of gunpowder in its unburnt form perfumed the air. It had a slightly metallic odor over the sulfur it was made up of. We would buy a big shopping cart full which I could dip into with permission. While that was its own interesting scent the one, I like comes at the other end of the process.

Whenever I would light off a string of firecrackers, I would step into the smoke cloud left behind. Here the sulfur is much more pronounced. Plus I would cackle like a demon in a cloud of brimstone. As much as the flashbang was the purpose for most the smoke was almost as good to me. Walking through Chinatown during Chinese New Year was my adult version.

I remember attending a Fourth of July fireworks show when the wind made a sudden shift. It brought the clouds of smoke from the big fireworks barge billowing over the viewing area. I was having my cake and eating it too. Watching the giant spheres of color on a cloud of gunpowder.

I don’t know if there is a deeper meaning to this other than many, I talk with have an odd scent they enjoy that make others turn away. It is a human thing to be attracted to the unusual. That includes scent.

To all my American readers I wish you a Happy Fourth of July. may you find a bit of scented happiness on the day.