We are told in Shakespeare’s “The Merchant of Venice”, “All that glitters is not gold”. When it comes to golden notes in perfume they tend not to glitter they more often glow. In Fath’s Essentials L’Oree Du Bois a study in glowing gold fragrance is proof of this. 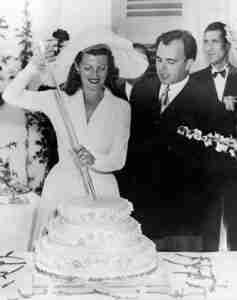 Rita Haywoth cutting the cake at her wedding to Aly Khan (r.) in 1949

For 2017 the creative director for Fath’s Esentials, Rania Naim, collaborated with perfumer Luca Maffei on four new releases. The collection is defined overall by capturing the “la Joie de Vivre” that was designer Jacques Fath’s guiding light. L’Oree du Bois is the name of the wedding dress and trousseau M. Fath designed for actress Rita Heyworth on her 1949 marriage to Aly Khan. When you look at the wedding dress in the picture above you see a minimal aesthetic applied to a formal garment. It carries understated streamlined sophistication. All four of the new Fath’s Essentials designed by Sig. Maffei share that design aesthetic. For L’Oree Du Bois he finds a way of combining golden notes which glow but also finds room for some spiciness and bitterness to provide some bite. 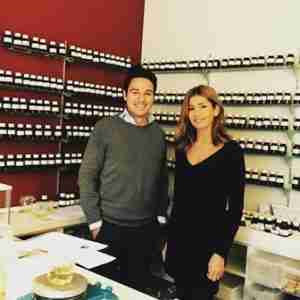 The focal point of the top accord is yellow mandarin and mimosa. The source of the mimosa is golden mimosa which is a version of the floral species which blooms in the winter. When these blooms capture sunlight, they illuminate in to tiny glowing orbs. In the fragrance, the mandarin plays the part of the sunlight transforming the mimosa into pulsing life. There is some neroli, ylang-ylang, and broom here but the main supporting note in the top accord is saffron. It disperses itself through the mandarin and mimosa like copper strands. A lively spicy intermezzo of cumin and cinnamon sets up the use of a honey raw material which has been isolated to give it a corona of bitter sweetness around the more usual viscous goldenness. The base is mainly a creamy sandalwood which supports all the glowy goodness that preceded it.

One thing about Sig. Maffei is his desire to find a way to add new raw materials into his fragrances. The honey in the heart is that innovation. Sig. Maffei uses it as part of an ode to gold that is L’Oree Du Bois.

Disclosure: This review is based on a sample provided by Fath’s Essentials.