When I am back in South Florida, visiting, like many who visit I usually end up on South Beach. After we stroll around, the early morning hours are often spent on a park bench in Lummus Park. There is a smell as the tropical night begins to cool, the night blooming flowers are in their glory, and the waves crash on the beach as the tide comes in. To me it the smell of where I grew up. Until recently a perfume has never completely captured that smell; Regime des Fleurs Nitesurf does.

Regime des Fleurs is a new indie brand founded in February of 2014. The owners and self-taught perfumers are Alia Raza and Ezra Woods. Ms. Raza is a filmmaker and Mr. Woods is a stylist who want to make a perfume line focused on different florals. They also want to hearken back to the brazen style aesthetic of the 1990’s. All six of the debut fragrances are based on specific florals and they all have a pretty significant presence to them. There isn’t anything introverted about these first releases. Nitesurf’s central flower is neroli. Neroli is reminiscent of Florida Water which is the classic citrus eau de cologne I smelled everywhere growing up. This floral core is placed into a matrix of beach notes to create an olfactory still life of a night by the beach. 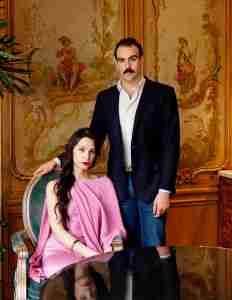 The neroli on top glows with the brightness of the neon on an Art Deco hotel. There is almost a palpable buzz. To go with that electrical hum an ozonic accord picks up on that. This is a typical aquatic neroli opening. What changes it is by adding in some supporting florals, like ginger lily, it gives a greater depth to the neroli. It feels like the neroli is on a time lapse loop as it blooms and expands rapidly. I like the expansiveness of Nitesurf at this moment in its development. To create the surf Ms. Raza and Mr. Woods make a choice of two notes to realize their vision. Ambergris is a typical choice. Distillation of crushed nautilus shells is not a typical choice. This ingredient is what separates indie perfumery from the mainstream. This is the second time I have smelled a distillate of crushed sea shells in a perfume and it adds this earthy chalky quality which in combination with the ambergris creates a fabulous beach accord. The neroli is still in place as the surf accord comes together and once they are all there Nitesurf is complete.

Nitesurf is my favorite of the original six releases and it is a perfume which makes me interested in what Ms. Raza and Mr. Woods do next. For now I just put on some Nitesurf, close my eyes, and imagine I am with my friends.

Disclosure: This review was based on a sample provided by Regime des Fleurs.