I was very fortunate to have a very good friend living in New York City when I got my first job in 1984 in Connecticut. It allowed me to explore one of the great cities of the world as a young man. Current events got me to thinking about one of my favorite experiences seeing a play in a theatre.

In 1987 Eric Bogosian produced a new play called “Talk Radio” for the New York Shakespeare Festival. Mr. Bogosian had made a name for himself with his one-man shows. They were series of monologues by different characters. They would attract the attention of the biggest Broadway producer of the era Joseph Papp who asked Mr. Bogosian for a new production for the NY Shakespeare Festival which Mr. Papp oversaw. This was the opportunity for Mr. Bogosian to have his play “Talk Radio” produced. 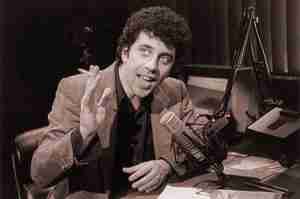 “Talk Radio” tells the story of one night in the life of talk radio personality Barry Champlain. The night the play takes place is the day before his show becomes syndicated nationally. Barry is shown early on as the master of his domain, toying with his callers. One encounter is with a caller named Josh who worries that international bank policies will harm the Third World. Visually over Mr. Bogosian’s shoulder there is a screen which shows the headlight of a train as he bores in on the caller. As he humiliates Josh for his inability to properly define Third World the picture of the train gets larger and larger until as it fills up on the screen he hangs up on the caller.

Another encounter takes place when a caller questions Barry’s ethnicity; suspecting him of being secretly Jewish. Barry tells a story of a visit to a concentration camp. As he walked through the camp, he recalls how he found a Star of David among the gravel. He wonders who it had belonged to. He then says he pocketed it and returned home with it. In fact, as he is talking to the caller, he is looking at it on his console. Except we as the audience see him looking at his glass of whisky not a Star of David. He then brutally takes down the caller before she hangs up on him.

Throughout the play the people in Barry’s life provide background as they step forward during commercial breaks to tell how they met him. Linda who also works at the radio station tells how she met him and eventually slept with him. She finishes her monologue with this line, “Barry Champlain is a nice place to visit, but I wouldn’t want to live there.” The play ends with the realization that Barry is the creature behind the microphone; leaving it up to the audience to decide what that means. 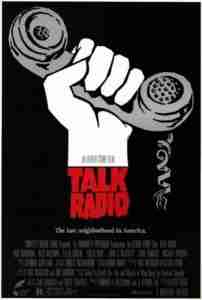 In 1987 talk radio was in its infancy. It is still amazing to me how right Mr. Bogosian would be as the future of the form was syndication. These voices in the dark spread from their town to the nation at large. Because I saw this prior to that I have always imagined every talk radio personality as a version of Barry. Which means I take all of them with a huge grain of salt because I am not sure when they are actually holding a Star of David or talking to a glass of booze. I suspect that like Barry it is all about being entertaining enough to your audience without stressing out too much about accuracy. It is why I never see them as purveyors of truth but entertainers. It also means I can listen to any of them because I don’t take them seriously.

“Talk Radio” would become a movie a year after it was produced, directed by Oliver Stone. In just that short time a Denver talk radio host Alan Berg was shot by a listener. They would graft some of Mr. Berg’s life onto the play to produce the movie which has a different ending. At the time I found the movie ending to be unrealistic. Recent times have shown me that might be a false assumption.

Of all the memories I have of New York City the night I saw Eric Bogosian perform “Talk Radio” is among my favorite and long-lasting ones.