I don’t know what is in the water over at the creative part of Disney Studios. Based on what they have been doing over the last sixteen months you almost have to believe a fairy godmother, or two are involved. They used The Mandalorian to re-invigorate Star Wars. Now they are doing it again with the Marvel Cinematic Universe (MCU). They are taking the opportunity provided by being able to tell stories in episodic fashion to add even more depth to the overall world building. With WandaVision the first of this new way of exploring the MCU they knocked it out of the park. 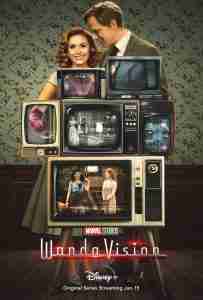 One of the things the movies have been a little light on is being able to delve into the consequences of the Marvel heroes’ actions. It is not ignored but it also isn’t given the depth it could be. Enter writer Jac Schaeffer who wanted to create a whole series around that theme. Together with director Matt Shakman they created WandaVision to be about one powerful person’s grief and how a person like that might express it. They use a brilliant device to achieve it.

They choose to pay homage to classic sitcoms. Many of the episodes are riffs on a popular sitcom of a decade. The first episode is based on “The Dick Van Dyke Show” of the 1950’s. To add extra authenticity to it they actually filmed it in front of a live studio audience. They also spent time with Dick Van Dyke to learn about how they approached the show back then. This attention to detail shows. Each subsequent episode takes on “Bewitched”, “The Brady Bunch”, “Full House/Family Ties”, “Malcolm in the Middle”, and “Modern Family”.

In each episode Elizabeth Olsen as Wanda and Paul Bettany as The Vision play their love story out against the backdrop of the sitcoms. As we move along, we come to realize there is something not quite right about it all. The reason for it all comes from the trauma of everything that has happened to Wanda. I am being especially obtuse because a huge part of the fun of WandaVision is figuring out what is going on. Mrs. C and I were talking back to the television through each new twist.

The one thing I want to mention is how amazing an actor Elizabeth Olsen is. She channels everyone of the sitcom moms she is asked to. The flightiness of Mary Tyler Moore as Dick Van Dyke’s wife to the documentary breaking the fourth wall of Julie Bowen’s Claire Dunphy from “Modern Family”. She has every little mannerism and way of delivering a line down to perfection. Once the sitcoms end and Wanda’s actions are revealed she is even better. As she lets us in to the towering grief which brought all of this on.

This is exactly what having the MCU on Disney+ is for. This is a story that needed to be told in this way. It could never have been shoehorned into a theatrical runtime. What is particularly exciting about this is it is clear that the Marvel executives are going to allow for this kind of very creative storytelling over and over. It just adds to the legacy of success of the last decade because WandaVision proves the vision that comes from the top is almost unerring.