When it comes to storytelling I am a fan of the kind which respects my intelligence by just tossing me inside their reality and letting me figure it out as I go along. Even more I like it when there are things for me to notice which have nothing to do with anything but go by in a flash for a laugh. I know this is not the preferred choice for many but for those who share my enthusiasm for this kind of storytelling I have a new TV show for you.

When I was at New York Comic-Con they previewed the first episode of the new BBC America series Dirk Gently’s Holistic Detective Agency. The story comes from the universe created in the two novels by author Douglas Adams of Hitchhiker’s Guide to the Galaxy fame. Mr. Adams books are notoriously difficult to bring to life visually because on the printed page they careen around throwing off plot and whimsy simultaneously. It takes a special talent to do this correctly and Max Landis who wrote all eight episodes seemingly has done it; based on the evidence of the first episode.

If you are a fan of Mr. Adams’ Dirk Gently books you’ll be pleased to know that Mr. Landis isn’t adapting either. Instead he has crafted an entirely new third adventure for the Holistic Detective. In the first episode Mr. Landis’ script gets the spirit of the manic fun of the novels spot on. Emphasis on manic as the plot moves fast. This is not a television show to watch while doing something else. There is so much to see that taking your eyes off of the screen means you will miss something. 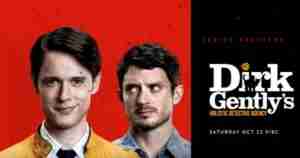 The first episode opens with a crazy tableau in a hotel room of carnage from something not quite natural. As the camera tracks through the scene it is one of those moments when you see lots of things which will eventually be explained but not right away. After the credits have rolled we meet Todd Brotzman, played by Elijah Wood, who wakes up to someone using a hammer to bash up his car. From there his day spirals into lunacy as Dirk Gently shows up to make sure that degeneration accelerates. Dirk Gently is played by Samuel Barnett who finds all of the nuances of the character. He can be a stream of consciousness but when it chooses to form an eddy for a moment it calms into real tenderness. There is a scene where he meets Todd’s sister Amanda where this momentary island of serene perception is at its best. Another standout is actress Fiona Dourif who plays a Holistic Assassin. She is the dark to Dirk Gently’s light. Ms. Dourif alternates really menacing with comedy extremely well.

Of all of the new things I saw at this year’s New York Comic-Con this is the one I am most excited to see more of. It premieres October 22, 2016 on BBC America.