I am not sure if the European Grand Tour is still a thing among a certain section of affluent society. What it consisted of was after someone had finished their studies before starting their first job they took a tour of Europe. It was a rite of passage. Back in the mid 1980’s it was still a tradition. A new colleague had returned from his. He would tell us lovely stories of his travel. The one that has stuck with me was of an evening in Rome when he and his host lost track of time. My friend was going to be late. His host told him not to worry as they hopped into his Ferrari Spyder. They arrived at their destination in a breakneck ride across Rome. After my friend got out of the car his host flipped his scarf around his neck saying, “Always trust the King of Rock and Roll.” Then he shifted into gear and roared off. When it comes to perfume there aren’t that many stories with that much panache, except for one; Eight & Bob. 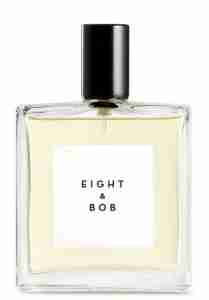 When I first tried this perfume upon its release in 2012, I found the story attached to it as engaging as my friend’s. The way it goes is in the 1930’s another young socialite was on his European Grand Tour. He would also make the acquaintance of a man of roguish charm, Albert Fouquet. As they ran around the Cote d’Azur the young American was taken in by M. Fouquet’s scent. Of course there was a story. M. Fouquet had been traveling in South America when upon a hike in the Andes he discovered an indigenous plant called “Andrea”. The polymath Fouquet was also a perfumer and he took some Andrea home and designed his own cologne around it. This was what our Grand Tourist smelled. He cadged M. Fouquet into sending him some. Asking for eight bottles, and one for Bob, the future President JFK would create the name for the perfume.

The perfume is better than the story. M. Fouquet has made a sophisticated cologne meant to be worn on special occasions. He achieves this without resorting to the classic formal tropes of lavender or rose. There is a floral here which I presume is the winsome Andrea but it isn’t lavender or rose.

It begins with a spicy citrus top accord of lemon, cardamom, and ginger. This has a zestiness which makes me think of my friend’s Ferrari ride across Rome. There is a lilting floral in the heart which reminds me of a cross between violet and iris. Both might be here, but it is unobtrusive. It ends with a trio of woods, guaiac, cedar, and sandalwood. Some vanilla and patchouli provide depth to the woody base accord.

Eight & Bob sits on the shelf I reserve for the events where I must dress up. It conveys a worldly sophistication commensurate to the story behind it. I always wonder if it will send me off on my own grand adventure in a Ferrari or on the Cote d’Azur.