Television series re-invent themselves all of the time as cast members come and go. If the writing staff is clever and the casting is well done the best shows never miss a beat. As a plus it often allows for greater latitude in storytelling as the new character can often add a different viewpoint. Of course if the writers aren’t clever and the casting is lazy this can lead to the fairly rapid cancellation of a show. One show which actually thrives on the turnover of main characters is the sci-fi series Doctor Who.

Doctor Who has been around since 1963 and it follows the travels of the last Time Lord called The Doctor and a Companion who becomes the surrogate for the audience as this Earthling has to try and keep up with the Doctor. Doctor Who had a rebirth in 2005 as writer Russell T. Davies convinced the BBC it was time to give Doctor Who another chance to be discovered by a new generation. Which it has. His first Doctor was actor Christopher Eccleston. When the Doctor “dies” he regenerates with a new body and face but retains all of his memories. At the end of the first season Mr. Eccleston regenerated into The Doctor played by David Tennant and then five years on he would regenerate into actor Matt Smith who would play the role for three years. All three of these Doctors were young and of a like age to their Companions so there was a bit of romantic tension. The latest incarnation of the Doctor is a very interesting choice by the writers to go in a different direction. 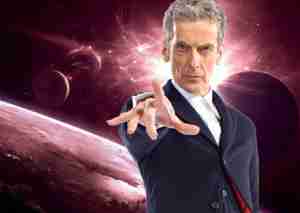 Peter Capaldi as Doctor Who

Actor Peter Capaldi is the twelfth Doctor Who and is a bit of a throwback to the earliest versions who were played by older men. This sets up a very different relationship with the current Companion, Clara. It is a bit of a reversal of roles as the young woman is helping the older visaged Doctor. One thing the writers seem to be exploring with this Doctor is the idea of whether what he does is considered “good”. The Doctor saves the universe and Earth many times but there is a cost to this, usually the masterminds behind it. This Doctor seems to be a little more concerned with what he does is “good”. Mr. Capaldi is giving this Doctor a world-weary character that is very different from what has come, especially with the recent three Doctors. Looking around on the forums it seems the initial reception is decidedly mixed. There are people, like me, who are digging the ambiguity. The detractors are missing the lively energy of the Doctor as portrayed by Mr. Tennant and Mr. Smith. These writers have been so successful that they definitely have the opportunity to develop an entirely different Doctor and I think the fans will allow for them to do that.

I am fascinated to see how this all turns out from a Doctor Who perspective and from whether a fan base will go for a Doctor very different from what has recently come. For now, I really look forward to the rest of this new season to see what the answers are.