I remember the Holiday season of 1984 for many reasons. It was the first Holiday where I had a job. I was able to have a giant Christmas tree because my townhouse had a cathedral ceiling. The other thing I remember was hearing on the radio that something had happened over in England on Thanksgiving weekend that was unheard of musically. That thing has been the foundation for much of the giving back to society that popular music has been responsible for since.

I remember being out getting that giant Christmas tree. On my way back I heard on the radio that some of the most popular English musicians were getting together to do a song. Pushed by Bob Geldof, the lead singer of the band Boomtown Rats, it was something to generate funds to battle famine in Ethiopia. Mr. Geldof used his clout, at the time, to enlist every famous musician in the country to join his group Band Aid. One of his criteria for asking someone to participate was the level of their fame. He wanted this to be a huge event of the most popular musicians of the day. One of the great stories is to get Boy George of Culture Club they had to fly him, via Concorde, back to the UK because the band was on a US tour. 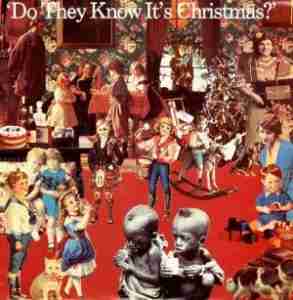 It came together very quickly as Mr. Geldof only had the use of the recording studio for 24 hours. He had already written the lyrics and Midge Ure of Ultravox had added the music while also producing. Over the course of November 25 the studio filled with the A-list musicians. It was reported on the network news here, an ocean away. The song was then released as a single on December 3, 1984. I made my friend in NYC wait as I stood in line at the Astor Place Tower Records to purchase a copy.

The song itself, “Do They Know It’s Christmas?” has become a Holiday staple on the radio. It has a permanent place on my Holiday playlist on iTunes. It is a simple song yet when they hit the final all-star choir singing “Feed the World/ Let them know it’s Christmas time again” I’m as happy to sing that as I am to bellow “Jingle Bells”.

It was a turning point in the concept of philanthropic musical efforts. In the thirty-five years since, music has found its standing as a societal influence much more surely. Every Holiday season I am reminded that back in 1984 the idea of making a song in a day to feed starving children is exactly what the Season should be about.