Anyone who knows me understands I love my science-fiction full of epic space battles and starships. Those are sprawling entertainments which are satisfying for the running time of the movie. Then there are the few and far between science-fiction movies where nary a blaster is fired or alien attack fended off. These are the movies where the plot is like its own plasma rifle which embeds itself deep into your thought processes for days afterward. The new movie Arrival is one of those kinds of movies. 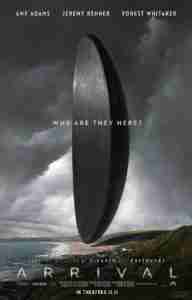 Arrival is based on a short story by author Ted Chiang. Mr. Chiang is a science-fiction author who almost exclusively works in the compacter literary forms of short stories or novellas. His stories have always stimulated my thinking. The one on which Arrival is based upon “Story of Your Life” is one ripe for this kind of analysis. When reading Mr. Chiang’s stories I never imagined any of them would be made into a movie. It is not that they were particularly unadaptable but that these are stories of huge ideas and concepts. Not amenable to the typical movie audience. Recent years have shown there is a limited appetite for these kinds of movies but I imagine the studios take a cautious approach to green lighting them. 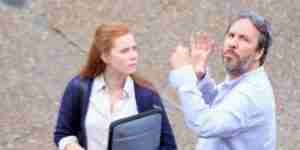 It helped that director Denis Villeneuve is one of the rising directorial stars in Hollywood. He was casting about for a science-fiction property which also had a significant psychological component. When he saw Mr. Chiang’s short story he knew he had found his vehicle.

The story is told from the perspective of linguistics professor Louise Banks. Her life changes when twelve extraterrestrial monolithic ships set themselves up all over Earth. In the one in the US she is asked to lead up the communication effort with the inhabitants of the ships. Working closely with a theoretical physicist Ian Donnelly they begin the long process to being able to understand each other. The movie ramps up the tension as the countries first cooperate in sharing information then one-by-one begin dropping out of the cooperative. This sets up the equivalent of a long fuse as Louise and Ian feverishly try to confirm their understanding of the visitors’ intentions. The last act is where most of the thought-provoking material is revealed. By the time the final credits rolled it was achieved brilliantly. I have not stopped thinking about the ideas within Arrival in almost 48 hours since seeing it. 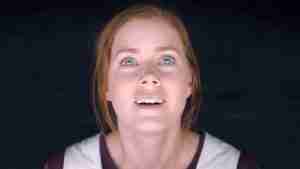 For a movie which is relying on ideas instead of effect it falls disproportionately on the shoulders of the actors to draw the audience in. In this case the performance of Amy Adams as Louise is as good as I’ve seen this entire year. Mr. Villeneuve made an interesting directorial choice to spend a lot of time with Ms. Adams’ face front and center in the frame. There is a saying that great actors can emote with their eyes. In Arrival, there are three key scenes in which the critical information is delivered solely by watching Ms. Adams’ eyes. As much as this is Ms. Adams’ movie Jeremy Renner’s portrayal of Ian provides the necessary grounding for Ms. Adams’ performance to have the right amount of resistance to deliver a great performance. When they hug at the end of the movie it is another moment which delivers an emotional wallop without a word being said.

One word of warning Arrival is a movie which requires a modicum of attention by the moviegoer. Mr. Villeneuve does not explain things twice and there is much here to understand. If you are looking for a thoughtful science-fiction film you cannot go wrong with Arrival. If you do see the movie and want some supplemental homework; in conjunction with the movie release there is a collection of Mr. Chiang’s short stories also out. It contains my favorite story by him “Division by Zero”.

Arrival is one of those two-for-one opportunities. It will introduce Mr.Chiang’s stories to a much broader audience which I hope will mean a few others will make it on screen. It also makes me look forward to Mr. Villeneuve’s next project even more eagerly. That next project is Blade Runner 2049 the sequel to one of the greatest science-fiction movies which also required your mind to be as engaged as your eyes. Everyone involved with Arrival is working near the top of their respective games.