Before niche really took off just after the year 2000 there were a few creative directors who were working on the early outlines of a niche aesthetic. One of those was Chantal Roos. From 1992-2002 she was among the most creative creative directors in perfumery. Because of that ability to challenge the status quo many of those fabulous perfumes were discontinued and are now highly sought after. Most recently she has been working with her daughter Alexandra Roos on their own perfume brand Dear Rose. I met both of them in Esxence in Milan in March. Soon after I returned I received a package of samples of all eight Dear Rose releases since its inception in 2014. Joining them in this endeavor Is perfumer Fabrice Pellegrin who has composed all eight. M. Pellegrin has worked a lot with the elder Mme Roos on other brands so it is natural to believe they had built up a rapport. What is refreshing about the entire Dear Rose line is these are not box checking easy fragrances. These are complex constructs which reward the time spent with them. The most recent release Mentha Religiosa is a good example. 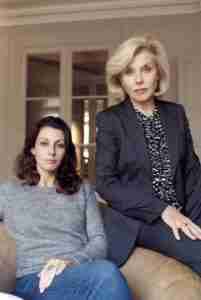 Mentha Religiosa is loosely translated to religious mint. How the creative team has interpreted this is to combine mint with church-like frankincense. Now that combination sounds like there was a collision as a dental products truck ended up in the apse of an old church. I have very little affinity for mint in fragrance because it is so fresh. Especially when I take a leaf of peppermint and slowly crushing it in my hand it doesn’t release treacly insipid sweetness but an herbal green matched equally with the sweet mint. This is the mint M. Pellegrin serves up with Mentha Religiosa.

How M. Pellegrin goes about doing that is to take peppermint essential oil and combine it in equal parts with petitgrain and a very bitter version of bergamot. The petitgrain adds back the green and the herbal bitterness as contrast. The bergamot adds a different kind of bite but one which creates that minty herbal accord. The very austere frankincense comes next. Together they form a delightfully quirky duo. I don’t think this is going to appeal to everyone but for me it was so off-beat I got lost in its oddness. A bit of iris tries to attenuate that but it isn’t until cedar and patchouli really grab ahold in the base that it becomes a bit more approachable.

I enjoyed getting to know all eight fragrances in the Dear Rose line because the entire creative team of The Roos and M. Pellegrin seem to want to make perfume interesting again. If you need to know what that smells like pick up some Mentha Religiosa.

Disclosure: this review was based on a sample provided by Dear Rose.