When it comes to superheroes in the comic books we are in an era where all their psychological underpinnings are put on display. That wasn’t the way it was when I started reading comics as a child in the 1960’s. The characters were stalwart do-gooders who were defined by that innate need to do the right thing. By the 1970’s the comic books began to “grow up” as the heroes faced more mature problems. This has continued to the present day. 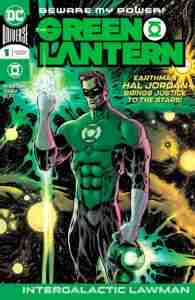 When it came to the transition DC had the most trouble moving their characters. Think of Superman, Batman, and Wonder Woman. Only Bruce Wayne was a place where you could build some darker shades without seeming like you were breaking the character. DC found their way and over time have managed to create interesting emotional places for their stable of heroes. Which is why It is funny that I am reminded of those early days with the current run of The Green Lantern by Grant Morrison and Liam Sharp.

The Green Lantern has always been a character with an interesting mythology. A member of an intergalactic police agency. Instead of Men in Black it was Men in Green. Hal Jordan is the only human member of the Green Lantern Corps. What Mr. Morrison has chosen to do with this series of stories is to focus on The Green Lantern as that cop who has a section of the galaxy to patrol.

As is so often the case with these limited issue runs the author creates a multi-issue arc. Mr. Morrison is throwing that out; creating an episodic series. Each issue covers a single story wrapped up by the final page. Hal Jordan even comes off a bit stiff like the classic beat cops. The fun of this series is how Mr. Morrison comes up with these crazy off the wall plots to put the taciturn Green Lantern in the middle of. If Green Lantern is by the book the book is warped as heck. There are so many crazy twists it could also have been subtitled “Law and Order: Intergalactic Unit”.

I’m not sure but it seems like Mr. Morrison is having a ton of fun being unconstrained by an overarching plot to just let fly with single issue mayhem. Beyond that Mr. Sharp’s visuals have a throwback quality too. They are reminiscent of the art seen in Heavy Metal or on a Frazetta poster. It is wonderful accompaniment to Mr. Morrison’s words.

If you are in the mood for some old-fashioned superheroics I highly recommend this newest iteration of The Green Lantern.