When I was at Pitti David Seth Moltz the perfumer behind D.S. & Durga handed me a preview of the next release. As we were spraying it on strips he told me the name was Debaser. There are times that something as simple as a name can tell you when two people share some common ground. I looked quizzically at him and said, “Is it named after….” Before I could complete the words Mr. Moltz finished for me, “Yeah, it’s named after The Pixies song.” Now there are many things which might inspire a perfume but this particular song would not be high up on anyone’s list, except Mr. Moltz’s. 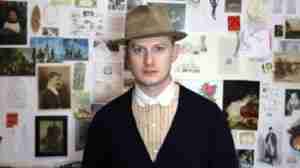 The Pixies were part of that late 1980’s wave of alternative rock bands. What set them apart were the lyrics of singer/guitarist Black Francis. The band covered a myriad of subjects but for the song “Debaser” Mr. Francis chose a particularly obscure bit of surrealism to sing about, the film Un Chien Andalou. That film was co-directed by Luis Bunuel and Salvador Dali. Over the running time of 21 minutes each chapter is a tableau separated by time-based title cards, like “sixteen years ago”. There is much to chew on for any fan of surrealism. The one thing most everyone speaks about is the opening scene which opens on a title card of “once upon a time”. In it a man sharpens a razor walks over to a woman holds her eye open and approaches her eyeball with a razor. After a cut to clouds moving across the moon in the night sky it returns to an eyeball being slit, not the woman’s but that of a dead calf. Mr. Francis was also fascinated by this imagery and one of the verses in the song is this:

Got me a movie

He goes on to sing, “I am Un Chien Andalusia” purposefully mangling the name. As I said not the kind of stuff you would look for to make a perfume. Mr. Moltz is inspired nonetheless as he turns out an alternative version of a fig-based summer scent. 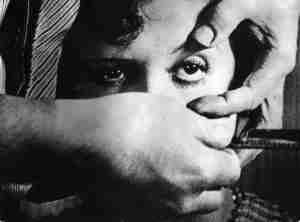 Simone Mareuil and a razor from "Un Chien Andalou"

Debaser opens on a very Morticia Addams pruning roses and placing the thorny stems back into vases vibe. Mr. Moltz plays with the idea of what is left of a fruity beginning if you remove the fruit. A green leafy accord and a pear stem accord are where things start. There are hints of what is growing but they have been excised from the scent via an olfactory straight razor. The heart starts to move into something more relatable as a rich fig arises through the stemmy top notes. Just as it seems this might normalize a veritable torrent of coconut milk arrives and swamps the fig. Just as I start to process that, iris appears. This is a weirdly satisfying, completely discordant, heart. These notes collide and recede for hours while wearing Debaser. It is definitely one of the more interesting heart note combinations I’ve tried so far this year. Debaser stays at this point for quite a while before taking a turn toward a dry woody finish that is almost too normal compared to what has come earlier.

Debaser has 10-12 hour longevity and above average sillage.

Debaser is a fragrance which revels in its unusualness. I also think Mr. Moltz had a ton of fun composing this combining all of the competing elements into a perfume. This succeeds so well I think it is the best perfume in the entire D.S. & Durga line. I know I’ve emphasized the point that it is a bit weird. Debaser is different but if you are looking for a fig perfume which has a sly intelligence at play look no further than Debaser.

Disclosure: This review was based on a sample provided by D.S. & Durga.