When I am at the beach in the summer there is a time of day which always seems poignant. It is about an hour prior to sunset. The day is drawing to a close. Twilight is still some time away. This is the last piece of full sunlight even though it is approaching the horizon. The beach is mostly empty. A few guys with metal detectors sweeping the sand. The air is cooling off as the sea breeze freshens. The night blooming flowers are early risers as jasmine and its contemporaries scent the air. I would regularly head out after my shower to enjoy this time of day. This was the time of day where life always seemed good. Costamor Beachwood comes the closest of any perfume I own to capturing it. 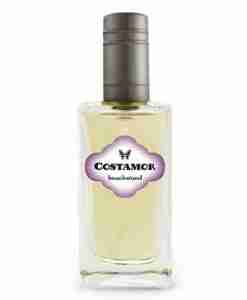 Costamor was founded in 2007 by Elizabeth Wright. She wanted to make perfumes inspired by her Costa Rican heritage. Her first two releases Tabacca and Sugarwood evoked the tobacco and sugar cane crops of the country. Beachwood was released two years later. This is less obviously Costa Rican and more typical Beach of the Americas. Like the earlier perfumes Ms. Wright showed a light touch which displayed them at their best.

Beachwood opens with a muted citrus accord built upon mandarin and neroli. This captures the sun after it has spent most of the day in the sky. A lilting coconut reminds you of the suntan lotion behind your ear you missed. An ethereal jasmine wafts out to find the neroli. There they form their own end of day floral accord as the neroli gives way to the night blooming jasmine. A sun bronzed skin musk flows underneath. It closes on a driftwood accord of sandalwood and cedar. As If I have found a big piece to sit upon to watch the fading of the sun. Amber imposes its presence over the later stages.

Costamor is a good example of one of these independent perfume lines where the creative force behind it executed their vision. After they were done, they could look upon it and say they had done well. That is the essence of enjoying the remains of the day knowing things are still good.