I don’t know if others have the same kind of perfume preferences as I do during the summer months. I’m reasonably sure colognes and light florals are constants. One of the things I have found over time that I really enjoy when the heat is at its most oppressive is a simple clean light woody perfume. As summer 2018 arrives I think Commodity Bois is going to be this year’s addition to my rotation.

It is also another example of why Commodity has been consistently succeeding. It is a mainstream brand where the owners are allowing the perfumers a freer hand to design. Their only limitations are budget and aligning with the minimalist aesthetic the brand wants to be known for. What this produces are simple constructs where the perfumer’s choices can have a maximal impact on a minimalist aesthetic. 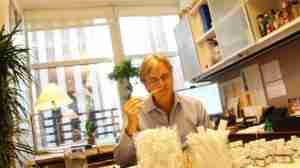 For Bois the perfumer is Frank Voelkl. Since Bois translates to “wood” he started with a duo of cedar and sandalwood. The ingredient which helps turn that from generic to something more than that is baie rose.

Bois opens with that baie rose out front. Baie rose is a versatile top note because it has many facets for a perfumer to tease out. What M. Voelkl chooses to accentuate is the peppery nature of the ingredient which is also known as pink pepper. To do this angelica is used which also has a peppery character. Together they form a textural piquant accord. It acts as a kind of figurative perfumer’s sandpaper as it roughs up the cedar and sandalwood by adding a peppery overlay on the woods. The baie rose is what really sealed the deal on my enjoyment of Bois. Some vanilla comes in without becoming cloying as I wore Bois on days where it was in the high 90’s on the thermometer.

I can’t know who shares my summer affection for woody perfume. If you do, Bois is one you should add to fill that space.  I think there are few better warm weather woods out there especially in mainstream.

Disclosure: This review is based on a sample provided by Commodity.