One of the great things about the current state of television is there is a platform for most any creative effort to find an audience. There are exceptions even among the largest names in the tech business. Back in 2018 YouTube started a series of original programming. The centerpiece of that was to be a series called “Cobra Kai”. A sequel to the 1984 movie “The Karate Kid”. The first season garnered positive press, but YouTube just couldn’t get eyes on their service. They would give it one last try a year later with a second season. In the crowded world of streaming services they were getting edged out. Earlier this year they decided to sell off their programming to other providers. Netflix picked up Cobra Kai and immediately approved a third season. Which is when I finally had the opportunity to see it. 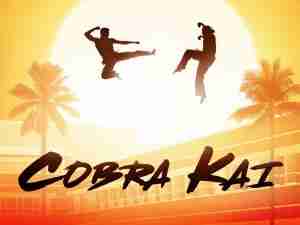 I liked the original movie fine as it was the classic sports underdog story told with martial arts. It leads up to the big match where our hero wins. Cobra Kai picks up the story 34 years later. Where the underdog has become a successful car dealer and the guy he beat has been much less so. The actors Ralph Macchio as Daniel LaRusso and William Zabka as johnny Lawrence reprise their roles now as grown middle-aged men. I was surprised to be drawn into the story as it is told mainly from Johnny’s perspective. You get the chance to see how the villain of the movie sees his actions. The Cobra Kai series is about how he tries to rebuild his life through rebuilding the karate dojo he trained in, Cobra Kai. As Daniel finds out it has been reborn his antagonism towards it resurfaces. Causing the men to clash.

Both eventually take in students. The show focuses on a group of them who go to the local high school. The writers have just enough fun with the analogy of karate as the big spectator sport instead of something else. At the end of Season 1 it comes to the same tournament the movie ended on with the dojos facing off. The success of the series is I wasn’t sure who I wanted to win. The characters were all sympathetic enough that it was tough watching one lose. This was the opposite of the sports underdog story as there weren’t cartoonish villains to hiss. The writers created a set of characters we rooted for on both sides. Season 2 follows up the aftermath of the first season ending on a cliffhanger.

The team of Josh Heald, Jon Hurwitz, and Hayden Schlossberg are to be commended for finding new ways to tell the story of the ability of sports to elevate. That they do it without turning their players into cartoons is why I am glad Cobra Kai has found a place to be seen.