When I spent time in New York City during the mid-1980’s one of the things I was most fascinated by was modern art. In those first years of my time in The Big Apple I was a glutton for seeing the artists I had admired. Even better was the opportunity to discover new artists who I had never heard of. One of these discoveries was Charles Demuth and he was my introduction to the concept of Precisionism. 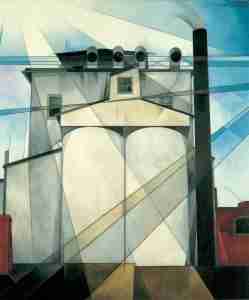 Precisionism arose from the more widely-known schools of Cubism and Futurism. The preferred subject of the Precisionist movement was the industrial landscape, in particular the American industrial landscape. Mr. Demuth would become one of the major artists within this genre. The painting which captivated me was the one seen above “My Egypt”. I would come to find out this was part of a seven painting set by Mr. Demuth that he did between 1927 and 1933. These seven paintings would be the capstone to his career. What I saw was a recognition that through the creation of the large industry of the early twentieth century America was creating its own pyramids. When I look at My Egypt through the fractured planes Mr. Demuth uses I see it as a flawed reflection which has come true in the nearly one hundred years since he painted them. 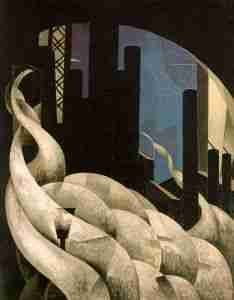 Incense of a New Church by Charles Demuth (1921)

Mr. Demuth did most of his work in the house he shared with his mother in Lancaster, Pennsylvania. The Precisionist style flourished from about 1916-1936 and Mr. Demuth’s earliest examples come from 1921. The one seen above, “Incense of a New Church”, has become one of my favorite paintings by Mr. Demuth. The tendrils of resinous smoke put together in overlapping segments so that it almost looks like reptilian. The smokestacks of the factory replacing the altar of the old church. I have a lithograph of this which is one of my daily inspirations. 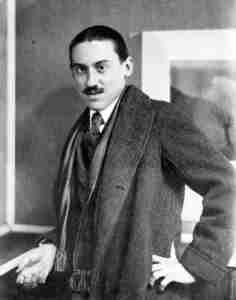 The 2008 retrospective that was held at the Whitney Museum in New York is still one of my favorites as I was able for the first time to take in many of his earlier pieces. It also confirmed that for me once he made the move to Precisionism that was where his best work was. He was a contemporary and close friend of Georgia O’Keeffe and Alfred Stieglitz. Upon his death in 1935 he left all of his paintings to Ms. O’Keeffe trusting her to be the proper arbiter of their eventual resting place. The picture of Mr. Demuth above was taken by Mr. Stieglitz and it is one of the few pictures of him we have.