Every year I go through my Seasonal Rose Curmudgeon Disorder. It’s because the lack of imagination in spring florals bothers me. There are a ton of fresh florals other than rose. There are lots of examples of amazing fresh florals which do not rely on rose; 2004’s Philosophy Amazing Grace uses muguet. It is one of my favorite perfumes to recommend because it is super easy to wear on a spring day. This year it gets some competition from in-house with Philosophy Amazing Grace Jasmine.

Perfumer Cecile Hua-Krakower was behind the original Amazing Grace and she has returned for this new version. What she does is do a subtle reworking of ingredients as jasmine takes precedence over the muguet. She also adds in a new ingredient which makes this even better.

The sunny citrus top accord remains. This is that feeling of standing in your door as a sunbeam hits you in the face. Lemon has an uplifting effect as it does here. Now we get to the floral core. Jasmine, muguet, and orange blossom made up the heart of the original. They also comprise the heart of this new one. The difference is Mme Hua-Krakower amplifies the jasmine while still giving significant roles for the other two florals. The transparent jasmine is given more substance as the orange blossom adds a deeper tint of white flower. The muguet is used for a fresh green grounding of the accord. It is a beautiful evocation of spring. Then Mme Hua-Krakower adds in a splash of coconut water. It is a surrogate for the watery dewy accords found in less engaging spring florals. Here it adds a dew with a slight tropical kick finding a partner with the jasmine. It all finds itself on an expansive flying carpet of white musks adding lift to everything.

For anyone to whom I have told to give Amazing Grace a try. You should give this a try for this spring. It is different enough to justify owning both. For anyone looking for my 2021 answer to what spring floral can I get without rose. Your answer is right here.

Disclosure: This review is based on a sample supplied by Ulta.

As we approach May Day and the traditional sprig of lily-of-the-valley (muguet) worn in celebration of spring becomes a natural theme for many perfumes. Most are limited editions, and most are kind of pricey. Like anything there are exceptions. One of the most economical perfumes which features muguet is Philosophy Amazing Grace which means it is an appropriate choice for this month’s Discount Diamonds. 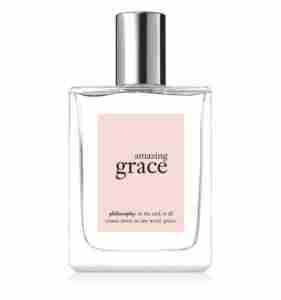 Philosophy was founded in 1996, as a beauty brand, by Cristina Carlino. As the brand gained a foothold she decided fragrance should become part of it in 2004. That led to two debut releases Amazing Grace and Pure Grace. Amazing Grace was the one which featured muguet.

Ms. Carlino founded Philosophy with a concept focused on skin care. By the time she turned to perfume she wanted her fragrances to be uplifting in style accompanied by its own credo on each bottle. For Amazing Grace it says, “in the end it all comes down to one word, grace” right on the bottle. For Amazing Grace, Cecile Hua-Krakower was the perfumer asked to create something which lived up to that. The result is a soft floral as the muguet is nestled within a bed of white musks.

What you first notice though is sparkling grapefruit for the first few minutes. This is a sunny citrus which sets up the appearance of the muguet. Muguet can be very green; Mme Hua-Krakower uses a set of other floral notes to dampen the green while amplifying the floral. Which means before the greener facets can be found jasmine, freesia, and orange blossom run interference. It makes the muguet slightly powdery. Mme Hua-Krakower then layers a number of white musks to form a downy foundation. I have always enjoyed this effect of these style of musks as they become softer than I would have anticipated. By the later stages it is this musk accord which is what remains.

Amazing Grace is one of those kinds of easy-to-wear perfumes I could describe as akin to your favorite t-shirt. Amazing Grace can be found in small bottles for around $20. If you want to wear some lily-of-the valley on your skin instead of pinned to your hair Amazing Grace is a muguet for all. 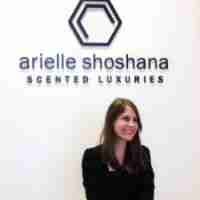 I first met Arielle Weinberg in New York at a Sniffapalooza. It was great to put the real person behind the writer of the blog Scents of Self. Ms. Weinberg provided a different perspective on fragrance. Her blog was started while she was a student in college. Her enthusiasm for fragrance was evident in her words but even more so in person. She had one of those personalities which drew people into a conversation. After she graduated she decided to create a career in the business. To that end she spent some time in New York working in a few places learning the customer service side of the business.

Having grown up in the Washington D.C.-area she knew there was no dedicated niche fragrance store in the metro area. As she gained experience in New York her eye was on returning home and founding a store. Which she did in the Fall of 2015; Arielle Shoshana opened in the Mosaic District of Fairfax, VA. I had the opportunity on a few occasions to be in the store on a regular day and observed Ms. Weinberg use all of what she learned to carry a new consumer through the niche perfume world. A year and a half later the store has created a presence for niche perfume in the D.C. area.

You might think all of that would be enough but Ms. Weinberg also had a creative impulse which needed to find an outlet. Shortly after the one-year anniversary Ms. Weinberg began to work with perfumer Cecile Hua-Krakower on a fragrance for the store which has now come to pass as Arielle Shoshana Saturday can now be found on the shelf in the store of the same name.

Passion fruit has significant tartness along with a deep tropical fruitiness. Capturing that balance is where Arielle Shoshana Saturday starts. The tart is ascendant early before the sweet tropical character slowly nudges it aside. Helping in that is the imaginative use of saffron. Saffron usually has a dry spicy floral quality when on its own. In combination with the passion fruit it trends more to its floral side allowing the spice aspect to act as a grace note providing textural detail. The saffron and passion fruit is where Arielle Shoshana Saturday lingers for hours only much later does sandalwood provide the base.

Arielle Shoshana Saturday has 10-12 hour longevity and average sillage. I have likened taking a step into something you want to do like diving off of a high dive. What Ms. Weinberg has done is more akin to the cliff divers of Acapulco. Most admirably after successfully leaping off the cliff once in opening her store she has scaled the heights and done it again with Arielle Shoshana Saturday. It is how passion, and passion fruit, can take you to the top.

Disclosure: This review was based on a sample provided by Arielle Shoshana.