Once a perfume brand has matured, defined their aesthetic, it is interesting to look back to the beginning to see if the initial releases predicted how the brand would eventually grow. Byredo was founded in 2007 by Ben Gorham. Over the last ten years, working exclusively with perfumer Jerome Epinette, they have created a distinctive Byredo style. But when those first four bottles bearing the name were released there was one which was the figurative red-headed stepchild, Byredo Pulp.

Last fall it looked like I would be writing about Pulp as part of the Dead Letter Office series. It was rumored that it was going to be dropped from the brand. When I heard that news I wasn’t surprised because Pulp had its own twisted little following perhaps driven because it felt unlike every other one in the line. It seems the news of discontinuation was more rumor than fact. Which then shifted it to this column because it is so different I think those who might dismiss the Byredo collection as not being their kind of fragrance might join the group of us who enjoy the Un-Byredo-ness of Pulp. 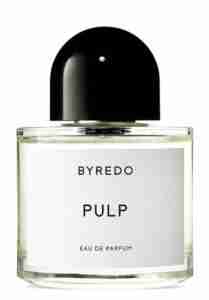 What sets Pulp apart is it is a fragrance of fruit overload. I know the concept of overload for a Byredo is already outside normal service. In this case M. Epinette was going for the literal pulp of multiple fruits. What has always made this perfume stand out is there is so much here somewhere in all the overlap a rotten fruit accord develops. Some of life’s potentially disgusting smells have some underlying facets which are oddly pleasant smelling. What M. Epinette gets in Pulp whether by design or fortune is that right on the edge of sickly sweetness that rotting fruit emanates. It is what will make you pull Pulp close or push it away.

The fruit basket comes from grapefruit, fig, red apple, blackcurrant buds, and peach blossom. All of this roars out of the gate. It is seemingly chaotic but rather quickly all the fruit pieces settle into their lanes. In the early going it has a crisper quality than you might expect. As some greener notes begin to arrive in cardamom and cedar the beginning of the decay sets in. Eventually the sweetness is heightened following a collapse in to a praline accord in the base.

Pulp has 8-10 hour longevity and above average sillage.

I am happy that the rumors of Pulp’s demise were overstated. I think every brand needs something to show how far they’ve come. Pulp is that signpost as The Un-Byredo.