For every Baby Boomer who grew up near a beach there is one scent which will immediately conjure childhood summers: Coppertone. Coppertone was the leading suntan lotion/sunscreen throughout the 1960’s and 70’s. As far as I can tell it remains #1 in 2020. Which makes me wonder if it will be as indelible to the current generation.

My first memories of going to the beach was as a five-year old. We made the short drive out to Cape Florida State Park. I was ready to go. I wanted to run into the crashing surf. Before that could happen, my mother took out the brown plastic bottle of Coppertone and applied it all over my exposed skin. Putting an extra layer on nose and cheekbones. I share the experience with millions who grew up in this time. 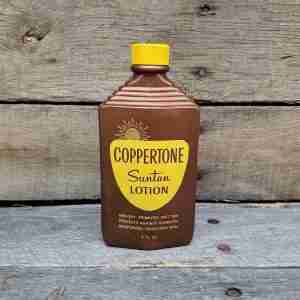 I have read that Coppertone spent a lot of time refining the scent of their product. To find something which would mask the chemical smell of what performed the protective reason for wearing it. What they settled on was an orange blossom focused accord. The interesting part is the chemical part blends with that to form something still pleasant while being completely unique. The smell of Coppertone was part of my wardrobe for most of my life in S. Florida. In a lot of ways it felt like a more solid version of the Florida Water which scented our home. I should probably consider making Coppertone the answer to the question of what my first fragrance was.

It is such a unique scent, perfume has not allowed it to pass by. There are two that I own which capture it dead to rights. One is Bobbi Brown Beach where perfumer Claude Dir also mixed in a healthy dose of Calone to put some sand and surf into the bottle.

CB I Hate Perfume Day at the Beach 1966 is the closest to capturing that childhood memory I have. Perfumer Christopher Brosius’ Coppertone accord is so good it feels photorealistic. He chooses to create his beach accord without relying on Calone which makes it closer to what I remember.

There are few scents which can immediately call to mind a specific product. Coppertone is hard wired into my memory of the beach.