I am a big fan of the biannual perfume magazine NEZ. Run by Jeanne Dore and Dominque Brunel it has formed one of the best contemporary references for perfume lovers. I look forward to each new issue. When I ordered the latest issue, No. 8, I was given an option to have a perfume included. I clicked on that choice and received a 15mL bottle of perfume that is the beginning of a yearly perfume project for NEZ.

They are calling it 1+1 imagining one creative from outside the perfume world and a perfumer coming together for a limited edition. For this first release they chose Hong Kong designer Alan Chan and perfumer Maurice Roucel. Mr. Chan is known for his riffs on tea house designs. After talking with M. Roucel they decided on a perfume based on tea called NEZ Hong Kong Oolong. 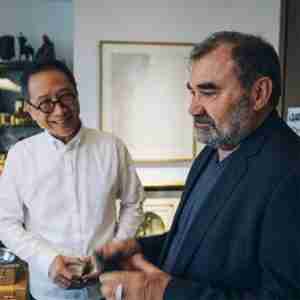 Within the accompanying magazine there is a lengthy article on the entire design process. What caught my attention was the desire of both men to capture the history of China as it is faced with evolving in the 21st century. By choosing oolong tea they capture the contrasts apparent in balancing the past and the present.

The perfume opens with the oolong in place. Oolong is the compromise tea for those who don’t want bitter matcha or intensely smoky lapsang souchong. Oolong is the middle ground with a hint of the bite and smoke. M. Roucel constructs an oolong accord that captures that. In the early moments it is a strongly spiced version of oolong as cinnamon, clove, and cardamom combine with the tea. These can coax out the greener face of the oolong accord. As we transition to the heart a lilting veil of jasmine also finds the greener nature of the accord. The smoke gets its chance as leather and incense find those aspects while giving them life. It finds a sweet creamy contrast in the base with sandalwood and tonka adding a bit of warm woody sweetness to the final composition.

One of the things I admired most was that the perfume found its own compromise between the transparent trend and full-bodied styles. Like the tea it emulates Hong Kong Oolong thrives in the middle ground.