On my recent visit to Boulder, Colorado I finally had the opportunity to spend some time with independent perfumer Amber Jobin. We have corresponded digitally over many years. This was the first time we were in the same place where we could relax. One of the things about independent perfumery is that through an artist’s perfumes you can get a picture of who they are. Ms. Jobin exceeded what I expected to find.

Ms. Jobin has come to perfumery through the crucible of the yearly Burning Man event. She has attended for several years and began offering custom fragrance blends as part of her contribution to the temporary society the event represents. She also creates a distinct “Burner” perfume each year based on the theme of the given year. It was through these early fragrances I became aware of her. As a student of Dawn Spencer Hurwitz, and now a colleague in her Essense Studio, Ms. Jobin was uncommonly polished in her early work. If there is a common aesthetic that ties her perfumes together it is curious intelligence; which might be redundant. Ms. Jobin has been able to distill the abstract into perfume. At its base it is what all perfumers are doing. It is just Ms. Jobin does it with a little more verve. Of her most recent releases Aether Arts Perfume Daydream in Blue displays this. 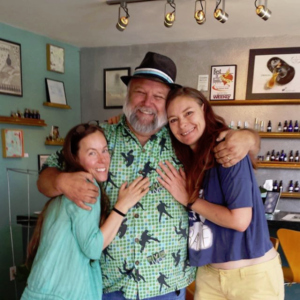 The perfume was inspired by the song “Daydream in Blue” by the band I Monster. Ms. Jobin realized it was a song about daydreaming while in a field of wildflowers, but this reverie is a sexual one. It is unrequited because the dreamer’s partner is only present in the imagination. Ms. Jobin imagines the dreamer having an actual partner for whom that desire can be acted upon amongst the literal birds and bees doing their work pollinating things. She says in her press release, “I loved the idea of a pretty experience wrapped around a deeply erotic one.” This is exactly that.

The early moments of Daydream in Blue set the stage with a gentle floral accord matched with some of the grassy ingredients. It is a sun dappled meadow. Through an incredibly constructed accord Ms. Jobin captures the entire experience of making love outside. Her main accord is comprised of deer musk, civet, and costus. It is the balance she achieves with that last note that brings the whole thing together. Costus is a tricky note to get right. For Ms. Jobin she actually wanted to capture a fully realized erotic moment which means the smell of semen on sun warmed skin. I can hear some readers thinking that doesn’t sound great. Ms. Jobin has an ability to find beauty out of what I described. It especially comes home when the florals and grassy notes reappear around that animalic accord as nature returns after passion.

Daydream in Blue has 8-10 hour longevity and average sillage.

This is what sets independent perfumery apart. The ability for a perfumer to take on a subject like this. I giggle to myself when I imagine one of those people spritzing perfume trying to describe this as they hand a strip to a mallgoer. This is perfume for those of us who see it as an art form as well as something to make us smell pleasant. Daydream in Blue succeeds on both of those levels. I adore much of what Ms. Jobin has created over the years but this one has also exceeded my expectations fulfilling desires of all sorts.