All independent perfumers carry their own unique inspiration into their fragrances. Amber Jobin’s inspiration is renewed every year when she attends the Burning Man festival. As her part of the community she has a stand called “The Olfactorium” where she dispenses a perfume designed for each year’s theme called Burner Perfume. I came to know her through Burner Perfume No. 2 A Roll in the Grass. She has been one of the most wondrously imaginative perfumers because of this. That was on full display in last year’s Touchstone where she made a perfume out of our smartphone. This year’s overall theme at Burning Man was “I, Robot”. This led to not one but three Burner perfumes for her Aether Arts Perfume brand which she calls “The AI Series”. 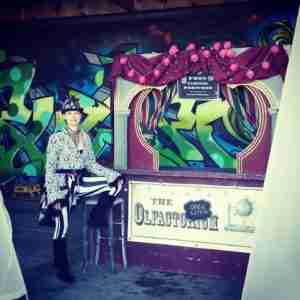 Amber Jobin at The Olfactorium

In her accompanying notes Ms. Jobin mentions she has been fascinated by Artificial Intelligence (AI) and was waiting for an opportunity to interpret it as a perfume. As I smelled each of her three perfumes, they felt like the evolution of our smartphones which means to me they are the next generation of what Ms. Jobin began in Touchstone.

Burner Perfume No. 9A Machine Intelligence– This is meant to capture the processes which happen within the shell. It is made up of three accords. First comes a metallic accord combined with the smell of electricity as it flows through circuits. On top of this Ms. Jobin creates an expansive aether accord. It has a peek-a-boo effect as it seems to dart in and out of the metal and electricity. This is the most fragile perfume Ms. Jobin has ever made. It is appropriate as it captures something as ephemeral as a thought coming together.

Burner Perfume No. 9B Android– This is Ms. Jobin’s idea of what we will rely on when AI advances so that the artificial is not able to be discerned visually. She thinks we will be able to use our nose. Android is what she thinks these beings will smell like. First it is the power source accord from 9A, but she has added something musky to it to make it a richer version. It is matched with the smell of the plastics and resins made to look like skin along with a very synthetic accord meant to represent the fluids running through the interior of the robot.

Burner Perfume No. 9C Synthetic Sex– This perfume is the idea of what AI might mean to our most personal interaction, sex. As we become more isolated in our AI cocoons, do we lose the humanity over the physical contact. To do this Ms. Jobin tweaks that metallic power source accord by making this one a bit spikier along with a processed air accord she calls “virtual space”. It reminded me of the smell of entering a room where the air is filtered to death. It is chilly, impersonal, and isolating. The only warmth is that electrical accord. It ends with the release of orgasm under these circumstances leaving a funky musky accord lying inside a hermetically sealed room.

Over the past year and a half Ms. Jobin has really been influenced by her artistic impulses. The perfumes since the release of Touchstone show an artist at work. The AI Series is another in that line of creativity proving there is nothing artificial about Ms. Jobin’s intelligent perfumery.

Disclosure: this review is based on samples provided by Aether Arts Perfume.