We all have different natural smells which signal the change of seasons. Based on the sheer amount of perfume that gets released this time of the year most brands believe rose is the harbinger of spring. While that might be true for many; my signal scent for spring comes with one of the first things harvested; rhubarb. I always look forward to May because rhubarb and strawberries are ready to be eaten at the same time. Rhubarb as a perfume ingredient has a rooty vegetal quality along with a hint of tart citrus facets and a sulfurous undertone. It is not an easy ingredient for a perfumer to work with but sometimes it can create the sense of digging in the soil. Here are five of my favorite rhubarb fragrances.

My first experience with rhubarb in perfume came from Comme des Garcons Series 5 Sherbet: Rhubarb. Perfumer Bertrand Duchaufour took rhubarb and displayed in all its tart vegetal glory. To stay true to the sherbet theme of the series M. Duchaufour adds in sweetness via lychee and vanilla. The whole effect is a creamy rhubarb ice cream. Beyond the use of rhubarb, it is just a fascinating deep freeze effect M. Duchaufour realizes.

Perfumer Jean-Claude Ellena uses rhubarb with its most common partner grapefruit as his top accord for Hermes Hermessence Rose Ikebana. Hermessences have been likened to perfume haiku. The rhubarb and grapefruit are the five syllables of the first line here. Peony and rose provide the second line while honey and vanilla the final line. Rose Ikebana is all about the rose but it is the grapefruit and rhubarb which keeps me returning to this minimalist construct. 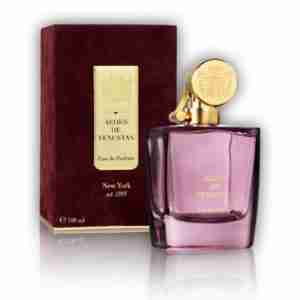 There was a part of me that wanted a perfumer to go all-out with the rhubarb and give it a chance to shine. M. Duchaufour would create a spring garden opening around not only rhubarb but tomato leaves, green apple, and strawberry in Aedes de Venustas. This is spring time digging in the dirt which patchouli represents before trailing to a warm amber. It is the perfume which showed me that rhubarb could be a star.

In Jul et Mad Terasse A St-Germain perfumer Dorothee Piot uses rhubarb as part of an elderflower accord. The rhubarb provides the tart aspect as along with grapefruit, freesia, and lotus flower the elderflower comes alive. It ends with a creamy sandalwood and patchouli base. This shows the potential of rhubarb as a versatile ingredient.

I was still wanting a rhubarb perfume which showed something artistic. I would get that from Hermes Eau de Rhubarbe Ecarlate. Perfumer Christine Nagel takes a fabulously complex rhubarb note then like tendrils of fog she ensnares it in a coating of white musks. Each new musk transforms the keynote displaying every facet that is there. It is a shifting study of rhubarb as the shadows and light alter constantly.

If you want to join me down in the dirt this early spring try one of my favorite rhubarb perfumes.

It is no secret that one of my favorite fragrance categories is incense fragrances. One of my favorite perfumers within that category is Bertrand Duchaufour. As I recounted in Perfumer Rewind from 2002-2007 I called him The High Priest of Resins for his facility with all kinds of incense notes. After that article was published I received an e-mail letting me know M. Duchaufour was returning to his resinous roots for an upcoming new perfume which would have a higher concentration of incense than any that came before. Often more is better but sometimes more is just too much. With M. Duchaufour at the helm the new release Aedes de Venustas Copal Azur reveals, in the hands of the master insense perfumer, more is just a new kind of beauty realized.

Aedes de Venstas is the line from the perfume store of the same name in New York City. Owners Karl Bradl and Robert Gerstner have been the creative directors for three previous fragrances. They return to working with M. Duchaufour who was the perfumer behind the first Aedes de Venustas perfume in this collection. They clearly felt that M. Duchaufour could bring something new to the incense perfume. One of the new things for M. Duchaufour was to work with a new incense source, copal. Copal comes primarily from Central America where it was used as an indigenous incense source during pre-Columbian times. It is also a component in some varnishes. M. Duchaufour had to be careful in how he used it in Copal Azur because if he used too much he would risk it smelling like varnish. He did not disappoint as he incorporated the new resin into his existing arsenal of resins. 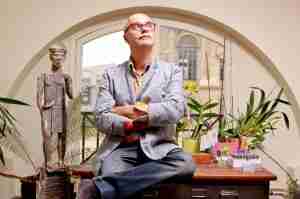 Copal Azur starts with a bit of an oceanic aspect as a mix of salt and ozone evoke a turbulent ocean. The copal comes next and it has a bit of a sharper edge to it than other incense sources. I think if this had gone much higher in concentration it might have been unpleasant. In Copal Azur it just sets the stage for frankincense to match it with its own slightly metallic nature that all fine frankincense seems to have. Cardamom and patchouli add some levity to the incense action. The base is the sweetness of myrrh matched with tonka and amber. The myrrh elides away the rough edges and takes Copal Azur deeper and softer. The final phase of Copal Azur is almost a study in the contrast of strength and softness. Whenever Copal Azur reached the late stages of development I always felt it culminated in a full spectrum incense accord.

It was a pleasure having M. Duchaufour return to that with which he was so successful with and create another perfume that is amazing. Copal Azur is a perfume for incense lovers which delivers it with an unmatched power.

Disclsoure: This review was based on a sample provided by Aedes de Venustas at Pitti Fragranze.

Every perfumer has a particular style that, in essence, becomes their signature on a fragrance they have composed. That doesn’t mean they can’t make perfumes outside of that but there is a sweet spot or comfort zone where these perfumers can seemingly make a memorable fragrance at will. Rodrigo Flores-Roux has a portfolio of many varied and fantastic perfumes. When he chooses to work on a floral centered fragrance that is where I think he has done his best work. The recent release Aedes de Venustas Oeillet Bengale is as good as Sr. Flores-Roux gets. 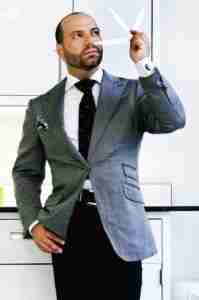 One of the reasons I think he is so deft with florals is he spent a year in college before going to Versailles to begin his perfume training. That year at university in Mexico City he spent studying biology. In an alternative universe where he wasn’t accepted into ISIPCA to become a perfumer I imagine him becoming a botanist presiding over a magnificent greenhouse of the most unique, and fragrant, blooms. In the universe we live in Sr. Flores-Roux is a perfumer and he brings the observant eye of a scientist when he chooses to interpret a flower as a perfume. There is always an elegance of precision to Sr. Flores-Roux’s scents but when it comes to the florals it often seems like it is being dissected into its component notes to be put back together. Oeillet Bengale is a type of China rose and owner of the perfume boutique Aedes de Venustas, Karl Bradl, saw a still life of it and knew he wanted this to be the inspiration for their third fragrance. Without the assistance of the press materials I saw “oeillet” and expected carnation. What Sr. Flores-Roux has produced is a simulation of the China rose by using carnation as the foundation to create the accord. A number of spice notes have to be balanced exactly to bring to life the desired “fiery rose”. All of this is placed on a foundation of smoking incense.

The first few minutes of Oeillet Bengale show off Sr. Flores Roux’s highly evolved citrus accord. It is paired with herbs and a surprising bit of strawberry. Together it creates a snappy opening full of refreshing notes. The carnation comes up next and this is the current version of carnation stripped of its clove-like nature because that version is no longer IFRA-compliant. Sr. Flores-Roux puts back in what IFRA has removed by using his own mix of spicy notes; clove (of course), cardamom, cinnamon, ginger, and black pepper return the spicy heart to the carnation and improves upon it. The heart of Oeillet Bengale really does feel as if it is a rose on fire as the florals and the spices feel right on the verge of spontaneous combustion. To add a calming effect Sr. Flores-Roux takes frankincense, labdanum, and tolu balsam to form a smoky resinous base to rest the smoldering bloom upon. For a long time on my skin this is where Oeillet Bengale lingers as the carnation and spices float on a resinous cloud of pungent vapor.

Oeillet Bengale is one of the most compelling perfumes Sr. Flores-Roux has created and it takes its place among my favorites by him. This is my favorite of the three Aedes de Venustas fragrances released to date. I look forward to whatever Sr. Flores-Roux will release next but when he is in his floral sweet spot there is nobody better.