In 1987 an album of Christmas music was released called “A Very Special Christmas”. Produced by Jimmy Iovine he gathered some of the biggest music stars of the day for a project to benefit Special Olympics. I generally enjoy my pop star Holiday tunes to be original but all of the tracks on this are on my Xmas playlist. 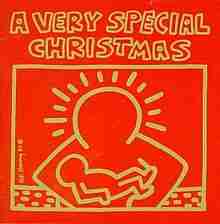 The reason is Mr. Iovine got some of the most distinctive voices to provide their own spin on classic songs. Madonna’s “Santa Baby” is just what you’d expect as she slinks through it all. Bono does his part on the U2 version of “Christmas (Baby Please Come Home)”. Chrissie Hynde leads The Pretenders through “Have Yourself a Merry Little Christmas”. Alison Moyet does “The Coventry Carol”.

My two favorite versions of classics done by divas are Eurythmics’ “Winter Wonderland” and Stevie Nicks doing “Silent Night”. On an album which includes Whitney Houston doing “Do You Hear What I Hear?” Annie Lennox and Ms. Nicks slay their songs. If you need some confirmation of the latter’s talent after discovering her on TikTok recently this “Silent Night” will give it to you.

The song the album is most known for is the only original on it. Run-DMC were at the height of their fame as one of the first black music stars to break through on MTV back then. They wanted to create the first rap Christmas song. “Christmas in Hollis” is what they came up with. It was built on the classic rap rhythms about spending the Holidays in Hollis, Queens. Each verse is its own story of Christmas cheer. It ends with them getting a new turntable and microphones from Santa to wish us Merry Christmas and a Happy New Year.

This remains one of the most popular Holiday albums of all-time as each year it makes it back on to the charts as new fans learn of it. It has earned its longevity.

Disclosure: this is based on a copy I purchased.