When it comes to odd Christmas song pairings there is very little which beats the classic Bing Crosby David Bowie duet. The Holidays have also brought out some other odd pairings and one of the lesser known ones is one of my favorites on my Holiday playlist. For Christmas 1979 Thin Lizzy would combine with the remaining Sex Pistols under the name The Greedies and record their only record; A Merry Jingle. 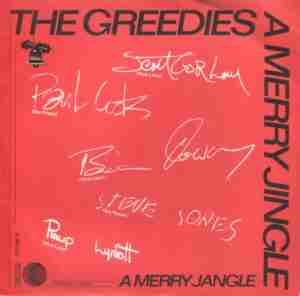 By the summer of 1978 the two Sex Pistols whose name you don’t remember; guitarist Steve Jones and drummer Paul Cook were trying to figure out what was next for them after the implosion of the Pistols. Thin Lizzy lead vocalist Phil Lynott was also dealing with band issues as he had an on-again-off-again relationship with guitarist Gary Moore. 1978 was a particularly turbulent time which made Mr. Lynott just want to find a way to keep playing.

Thin Lizzy was one of the founding British rock bands of the early 1970’s. As the decade was closing out Mr. Lynott was terrified of becoming irrelevant when compared to the punk rock scene taking over English music. One way to stay relevant was if your band is falling apart see if there any of the punks who might like to do something with you. Which leads to him suggesting to Mr. Jones and Mr. Cook about forming a new band. The core of this band called The Greedy Bastards was three Thin Lizzy and two Sex Pistols with a rotating group of others including Chris Spedding, Jimmy Bain, and Pete Briquette.

From there the path to recording a Holiday single as your first record for your new band does not seem like a logical choice. Yet this is what happened. The name was shortened to The Greedies so as not to offend. Instead of original music they would do a mash-up of “We Wish You a Merry Christmas” and “Jingle Bells”.

They would play it on BBC’s “Top of The Pops” in December of 1979. It would sell well. It would become a footnote in rock and roll Christmas music. The Greedies would never be heard from again.

When “A Merry Jingle” comes up on my playlist I often wonder what would have happened if they had stuck together. Could the punks have shown Thin Lizzy a few new tricks? Probably not. Instead a crunchy version of two classic Christmas carols is all we have.