If there is any phrase used in talking about fragrance that bothers me, it is “skin chemistry”. People will talk about how their skin chemistry makes a perfume smell different as if it is something quantifiable. As a scientist and a chemist calling it this is just a myth because there is no proof it exists and it darn tootin’ isn’t chemistry; more like physics.

Let’s deal with the obvious first. Does perfume smell different on different people? Yes, it does. The reason for that has nothing to do with some chemical reaction taking place on the skin. It has more to do with the lack of a balanced level of moisture on the skin.

Most of us do things which actively make our skin too dry by stripping the protective oils. In the winter indoor heating has no humidity. The biggest place it gets lost is in the shower. The shower is ground zero for your skin the hot water, the soap you use, and the kind of scrubbing implement can all conspire to deprive your skin of its beneficial oils. When do most of us apply perfume? Fairly soon after we shower. Before the skin has had a chance to replace what has swirled down the drain. The effect this has is the larger molecules used in a perfume are closer to the oils you just removed. What happens? Those oils go deep into thehair follicles where the sebaceous glands which produce body oils are located. This is what people who say their skin “eats” perfume are describing. These larger molecules seemingly disappear. They don’t really. They eventually rise back to the surface as the body replenishes the natural oils from below. 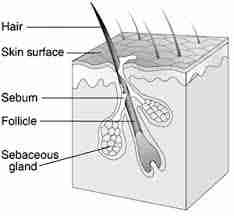 There is a solution to this and that is using a good moisturizer right after you finish toweling off after a shower. You can replenish with something other than your perfume. If you moisturize the places you apply perfume soon after you come out of the shower, you will see a marked improvement in the way you wear your perfume. I’ll even share my tip for making moisturizing even more effective. I use an unscented moisturizer. After I put some in my hand I spray some of the perfume I plan on wearing into the moisturizer and then apply it to my skin. This not only replenishes what I lost in the shower it also acts sort of like a primer before the real application of perfume takes place.

Now let’s get to the chemistry part of this. There are two things we consume as humans which have been documented to produce a smell on our skin. One is sulfur containing foods, garlic being the most common. The other is alcohol as in alcoholic beverages. You can conceivably have some sulfur containing compounds on your skin if you just ate a whole roasted bulb of garlic. Then if you decide to add a perfume on top of that things are probably not going to go well. But that is not chemistry there is no reaction going on between the sulfur containing molecules and the fragrance molecules. Instead what you have done is a poor job of layering by adding your favorite perfume over your natural “Eau de Garlic”. You can do a better job of this by not eating that whole bulb of roasted garlic and just picking two of your favorite perfumes to layer. Alcohol secretes alcohol onto the skin and strong spices like cumin containing curries can also linger in natural body oils. Let me tell you as a chemist none of these actually react with any of the molecules in your perfume. There is zero chemistry happening.

The myth of skin chemistry is really a story of moisturization and diet. If you’re looking for a more correct phrase start calling it “skin physics”